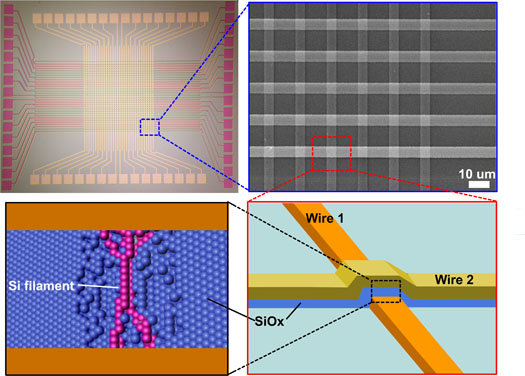 Even with great strides being made regularly in the realms of nanotech and materials science, Moore’s Law – the notion that the number of transistors that can be placed on a given integrated circuit doubles every 18-24 months – has for several years been bearing down on engineers who have shrunk conventional chip technology about as far as material limitations will let them. But a graduate student at Rice University has demonstrated that a well-known insulator – silicon oxide – may just be the minuscule digital switches of the very near future.

Researchers at a Rice University lab demonstrated last year that current could repeatedly break and reconnect tiny, 10-nanometer graphite strips to create reliable, very small memory bits. At the time they didn’t understand why the graphite did this so well; now, grad student Jun Yao has figured it out, and it has little to do with graphite.

Using silicon oxide, an insulator, as the meat in a tiny semiconductor sandwich, Yao showed that the electrodes will strip oxygen from the silicon oxide leaving behind a small chain of nano-sized silicon crystals. That crystal chain can then be connected or broken repeatedly by varying the electrical charge passed through it, creating a tiny switch that is always either on or off. And by tiny, we mean very tiny; Yao’s silicon oxide switch is just five nanometers (that’s five billionths of a meter) wide.

The graphite switches that seemed impressive last year were double that size, and conventional electronics can’t even come close to switches that small. Flash memory, in theory, will bottom out at 20 nanometers. Other conventional pathways might someday hit 10 nanometers, but it will be expensive to get there. Silicon oxide is already used in chip manufacturing and would be relatively easy to integrate into existing chip manufacturing tech.

Moreover, unlike flash memory silicon-oxide chips wouldn’t need to hold a charge and it’s perfectly suited to be arrayed in 3-D structures that can further help cram more switches onto a given switch, meaning chips get more memory for every nanometer of real estate. An Austin tech company is already testing a 1,000 memory element chip in collaboration with Yao and his colleagues at Rice. If the technology doesn’t hit any serious obstacles, single chips with memory comparable to today’s high-capacity disk drives could be a reality in just five years.

Learn How to Code in a Fun and Interactive Manner

Microsoft outage locks users out of Office 365, exposing the need for local...