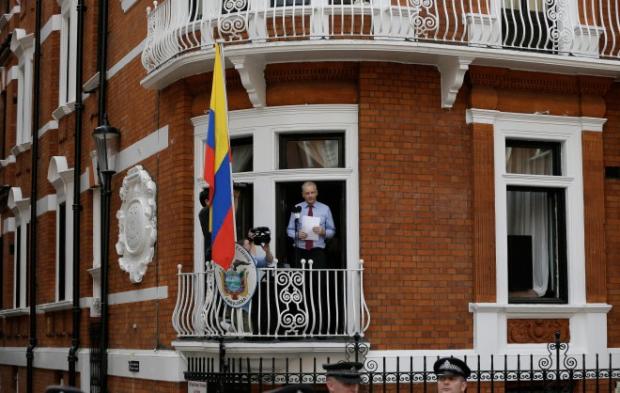 Assange said the U.S. was facing a momentous choice: “Will it return to and reaffirm the revolutionary values it was founded on, or will it lurch across the precipice, dragging us all into a dangerous and oppressive world in which journalists fall silent under the fear of prosecution and citizens must whisper in the dark?”

Assange stood on the embassy balcony, while dozens of UK police waited to arrest him if he left the embassy. Assange has a warrant out for his arrest for breach of bail if he leaves the embassy offices.

Speaking briefly to a crowd of supporters standing outside the embassy where he has been holed up for two weeks, Assange thanked the crowd for their resolve and generosity of spirit.
“On Wednesday night, after a threat was sent to this embassy and police descended on this building, you came out in the middle of the night to observe,” he said. “But I knew there would be witnesses, and that is because of you. If the UK did not throw away the Vienna Conventions the other night, it is because the world was watching. And the world was watching because you were watching. So the next time somebody tells you that it is pointless to defend those rights that we hold dear, remind them of your vigil in the dark before the embassy of Ecuador.”