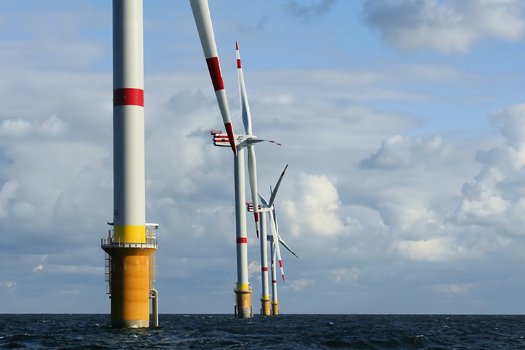 Wind power is pretty great: One doesn't need to do much but build turbines and capture the energy from a passing breeze. But, like what happened to the Ancient Mariner, still air means trouble. Intermittent energy is not useful for a grid that requires a continuous supply.

To get over this problem, engineers have devised a number of ways to store energy generated when it's windy for disbursement during the times when it is not. Ideas include giant flywheels, carbon-neutral natural gas and giant batteries made from gravel and argon gas. Now Alexander Slocum, Brian Hodder and their colleagues at MIT have demonstrated a new way to store that energy -- giant hollow concrete balls. They published their results this month in Proceedings of the IEEE.

Storage Concept: As the wind turbines turn, they pump water out of the hollow spheres. Once the wind dies down, the water rushes back into to sphere, spinning a turbine which generates power to send to the electrical grid.  Alexander Slocum, MIT

The concept is pretty simple: As floating offshore wind turbines churn, they send most of the generated power to the grid. Some of the power, though, goes to pumping seawater out from 25-meter-wide hollow spheres which sit on the seafloor. As soon as the wind dies down, the pumps turn off, and the seawater rushes back into the spheres through a turbine; the water turns the turbine, which then generates electricity. The researchers calculated that one such sphere, moored in 400-meter-deep water, could store up to six megawatt-hours of power. A few hundred of those would be enough to offset an hour of energy from a typical nuclear power plant.

The Biden Administration Deliberately Destroyed Our Capacity to Produce Energy

Algae energy harvester powers electronics for a year on its own

LiPower Solar portable battery box...Not my favorite...What to look for in a power box.