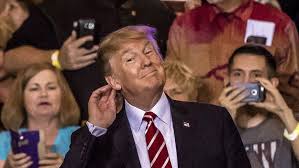 As an initial caveat, understand the difference between confidence and overconfidence. The former is a realistic expectation going forward of favorable electoral winds based on a thoughtful analysis. The latter is thoughtless and dangerous based on emotion and desire, rather than data and realism.

Republicans learned this lesson during the George HW Bush presidency. Bush enjoyed an 89 percent Gallup job approval in February 1991 after US victory in the Persian Gulf War. A little over a year later the bottom fell out after Bush reneged on his campaign promise, "Read my lips, no new taxes," nudging the economy into a recession. In July 1992, his approval rating was an anemic 29 percent. Welcome, President Bill Clinton.

Could something similar befall the Trump reelection efforts? Certainly. The economy is strong, but economies are cyclic, and recessions inevitably occur. The media can't destroy Trump as they didn't create him. Big media has been shooting spitballs at Superman Trump, everything bouncing off him and smacking the media in the face.

How Long Will the American Covid-19 Lockdown Last? Here's What the Patterns Suggest

Kunstler: When Americans Wake From The Corona-Coma, This Will Be A Different Country

Bill Gates Tells What to Expect After Covid-19

Day of Shame: US House Approves $2 Trillion Everything Bailout on a Voice Vote

Original artwork of the first ever Flash Gordon comic has sold for a world record $480,000...