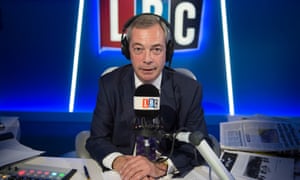 Nigel Farage has quit his LBC show 'with immediate effect' following talks with station executives, the broadcaster announced this afternoon.

The arch-Brexiteer is refusing to see out the remainder of his time with the station after being informed his popular evening show was to be wound down.

Bosses were understood to be caught flat-footed by his sudden departure and left scrambling to find a replacement for tonight's show.

His usual 6-7pm show this evening has been merged into Iain Dale's regular slot, which has been extended by an hour to become a four-hour show.

Mr Farage denied claims he stepped down from the station following a furious row with bosses, and told MailOnline he will not be commenting any further at this time.

The arch-Brexiteer leaves the broadcaster two days after he likened Black Lives Matter protesters to the Taliban during a fiery television debate.

LBC downplayed the departure and insisted Mr Farage's current contract was ending, but his own producer Christian Mitchell suggested he had been blindsided, tweeting: 'Hearing this on social media...'

The station this afternoon tweeted: 'Nigel Farage's contract with LBC is up very shortly and, following discussions with him, Nigel is stepping down from LBC with immediate effect.

'We thank Nigel for the enormous contribution he has made to LBC and wish him well.'

Yet fellow LBC presenter James O'Brien, a vehement critic of both Brexit and Mr Farage, gleefully tweeted: 'We got our station back'.