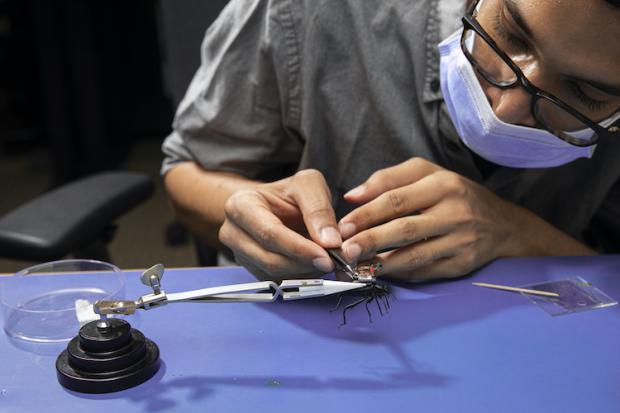 In the movie Ant-Man, the title character can shrink in size and travel by soaring on the back of an insect. Now researchers at the University of Washington have developed a tiny wireless steerable camera that can also ride aboard an insect, giving everyone a chance to see an Ant-Man view of the world.

The camera, which streams video to a smartphone at 1 to 5 frames per second, sits on a mechanical arm that can pivot 60 degrees. This allows a viewer to capture a high-resolution, panoramic shot or track a moving object while expending a minimal amount of energy. To demonstrate the versatility of this system, which weighs about 250 milligrams—about one-tenth the weight of a playing card—the team mounted it on top of live beetles and insect-sized robots.

The results were published last week in Science Robotics.

"We have created a low-power, low-weight, wireless camera system that can capture a first-person view of what's happening from an actual live insect or create vision for small robots," said senior author Shyam Gollakota, a UW associate professor in the Paul G. Allen School of Computer Science & Engineering. "Vision is so important for communication and for navigation, but it's extremely challenging to do it at such a small scale. As a result, prior to our work, wireless vision has not been possible for small robots or insects."