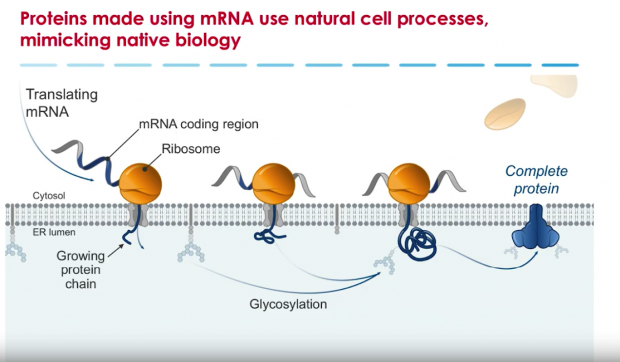 -The use of PEG in drugs and vaccines is increasingly controversial due to the well-documented incidence of adverse PEG-related immune reactions, including life-threatening anaphylaxis.

-Roughly seven in ten Americans may already be sensitized to PEG, which may result in reduced efficacy of the vaccine and an increase in adverse side effects.

-If a PEG-containing mRNA vaccine for Covid-19 gains FDA approval, the uptick in exposure to PEG will be unprecedented—and potentially disastrous.

-Moderna documents and publications indicate that the company is well aware of safety risks associated with PEG and other aspects of its mRNA technology but is more concerned with its bottom line.

A key technical challenge is to get the vaccines' bulky RNA "payload" into the cells intact—without it breaking down prior to arriving at its destination. In other words, mRNA vaccines will not work without an in-built delivery mechanism that enables the mRNA to shove its way into a cell's cytoplasm. The chosen solution is to use trendy biotech "carrier systems" involving lipid nanoparticles (LNPs). LNPs "encapsulate the mRNA constructs to protect them from degradation and promote cellular uptake" and, additionally, rev up the immune system (a property that vaccine scientists tamely describe as LNPs' "inherent adjuvant properties"). The LNP formulations in the three Covid-19 vaccines are also "PEGylated," meaning that the vaccine nanoparticles are coated with a synthetic, nondegradable and increasingly controversial polymer called polyethylene glycol (PEG).

… Moderna acknowledged the potential for its proprietary LNPs—and PEG—to produce "systemic side effects," …

In the corporate prospectus supporting Moderna's stock market launch in late 2018 (an initial public offering that set a record for the biotech industry), the company was frank that its technical approach has numerous risks. Specifically, Moderna acknowledged the potential for its proprietary LNPs—and PEG—to produce "systemic side effects," particularly given the scientific literature's documentation of these types of side effects for other LNPs. In comments not generally seen by the public, Moderna stated (p. 33):

[T]here can be no assurance that our LNPs will not have undesired effects. Our LNPs could contribute, in whole or in part, to one or more of the following: immune reactions, infusion reactions, complement reactions, opsonation reactions, antibody reactions . . . or reactions to the PEG from some lipids or PEG otherwise associated with the LNP. Certain aspects of our investigational medicines may induce immune reactions from either the mRNA or the lipid as well as adverse reactions within liver pathways or degradation of the mRNA or the LNP, any of which could lead to significant adverse events in one or more of our clinical trials. [Emphases and links added]

Far from expressing concern over clinical trial participants' welfare, that section of the prospectus concluded that any one of these problems "could materially harm [the company's] business, financial conditions, and prospects."