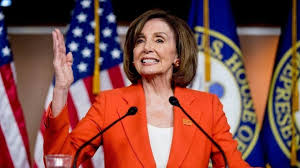 Pelosi will serve two more years in her post, after which she has previously committed to retiring her gavel by 2022. She has led the party in the House since 2003, as speaker or minority leader, and is the first speaker since 1955 to loser her gavel and regain it, according to the Wall Street Journal.

Following her nomination, Pelosi's larger challenge in retaining her speakership will be reaching a simple majority on the floor in January given a narrower majority, however her aides note that many Democrats who opposed her two years ago weren't re-elected. Her allies have pointed to her ability to keep the caucus 'mostly unified' throughout government shutdowns, an impeachment based on a Democrat hoax, and the coronavirus pandemic.

When the House elects its new speaker, Pelosi will need the majority of votes cast by both parties. Since nearly all Republicans are expected to back their leader, Rep. Kevin McCarthy, R-Calif., Pelosi can afford to lose only a few Democrats.

When Pelosi nailed down the support she needed to become speaker in 2018, she said she'd agreed to a proposal limiting her to serving in the job only through 2022. Several lawmakers and aides said memories of that commitment could lessen her opposition this time. -The Detroit News