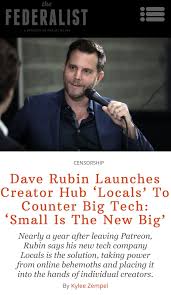 Dave Rubin, a political commentator and host of "The Rubin Report" talk show, on Wednesday launched his own tech company, Locals.com.

In an effort to combat online censorship, manipulative algorithms, and arbitrary shadow-banning, Rubin's move aims directly at Big Tech, which he says has created obstacles for content creators trying to promote their work and communicate with audiences.

To better understand Locals, think of it as an intersection of Patreon, YouTube, and social media, or as Rubin calls it, "digital homes for creators." To participate, content creators with some established following buy into Locals, which works with them to develop a website or app — depending upon needs and objectives — allowing each creator to operate their own personal website and community of followers and crowd-funders.

Each creator determines his own rules of conduct for his community and monetary threshold for access. For instance, Rubin's rules for his site are essentially don't do anything illegal and don't be a trolling jerk, and his subscription cost for community buy-in is a $3 minimum. Chronological content feeds can function as video receptacles, a creator messaging feed, and a social engagement tool for subscribers, among other things.

"Basically, we're unbundling the internet," Rubin told The Federalist in an interview. "Everything's sort of bundled. You know, we're all on these giant platforms. There's a million competing interests. There are terms of service that can't be or are never upheld evenly. There's definitely a feeling that there's a political bias — they de-platform, they censor, they suspend, and the rest of it — and basically, we want to give all creators a chance to completely own and control their community."