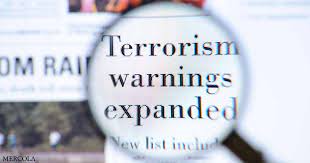 Over the past 18 months, COVID countermeasures have become increasingly tyrannical, and we now appear to have reached a new high (or low, depending on your perspective). The U.S. government is actually viewing citizens who exercise their Constitutional rights as domestic terrorists, enemies of the state.

As reported by Daisy Luther with The Organic Prepper,1 "Shocking and dehumanizing discrimination against the unvaccinated is about to make life VERY difficult." She is, of course, referring to the media and government narrative that if anyone gets infected with SARS-CoV-2, it's the fault of some germ-ridden disease-spreading unvaccinated person.

The Cynical and Dangerous Weaponization of the 'White Supremacist' Label

OMICRON: A Perfectly Timed Variant to Scare the Unruly Back into Submission

The Illusion of Democracy