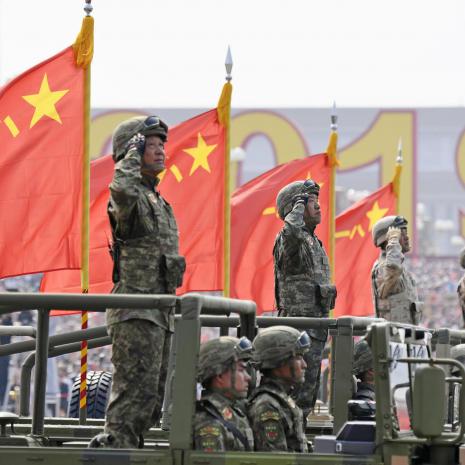 One of the main reasons is China's cratering economy. The recent collapse of the Evergrande real estate development firm is only the latest in a series of dire symptoms that are fueling rising domestic discontent. The $8 trillion debt crisis in the shadow economy—more than half of its GDP—is also looming large in China's ability to keep its financial system afloat. An aging, less productive population, higher production costs, and fleeing foreign investment all result in falling GDP.

The reality is that China's economic power is already declining.

Sure, the statistics can be adjusted, but it doesn't change reality. What's more, this across-the-board economic decline is driving the Chinese Communist Party (CCP) to impose even more extreme, oppressive measures against its people and businesses. The CCP's response only worsens economic performance and civil unrest.

Concurrently, Beijing has been adjusting its internal arrangements for several years. For example, its National Defense Transportation Law went into effect on Jan. 1, 2017. The law restructured its legal framework, putting all commercial shipping under direct authority of the CCP.

Externally, China's deepening isolation from the world is clearly evident and underscores its ongoing decoupling from the global economy and the international norms of trade and diplomacy. This trend may well make a Taiwan invasion likely sooner than later, if only to divert attention from China's domestic problems.