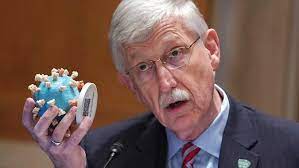 In a blistering Sunday night interview, CNN's Pamela Brown (credit where it's due) absolutely grilled Collins over the NIH's funding of New York-based nonprofit, EcoHealth alliance, which performed textbook Gain of Function research – genetically engineering bat coronaviruses so they can infect humans. Last week the NIH admitted that EcoHealth violated the terms of a grant by failing to report their achievement (which EcoHealth denies), sending both Fauci and Collins into full damage control over the weekend.

Now, the official story is that while EcoHealth violated their contract, and are allegedly 'in trouble' for failing to report their achievement, the NIH and NIAID (Collins and Fauci) maintain that the research still wasn't risky enough to qualify for enhanced oversight.

CNN's Brown didn't let Collins get away with his carefully crafted talking points – repeatedly pressing him over what else the NIH may be funding that they don't know about, and asking why the American people should trust them after last week's revelation.