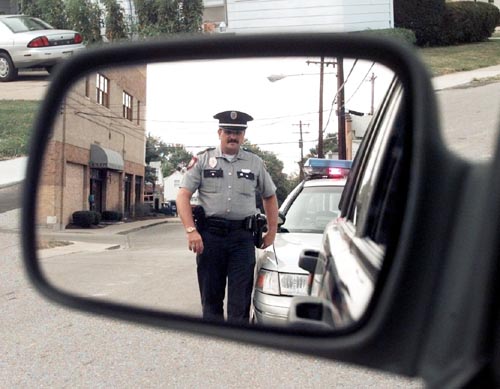 On a whim following our Denver Summit – and despite truly abysmal weather – Casey Research CEO Olivier Garret and I cabbed it down to a local public golf course for a quick nine holes. Afterwards we were returning to the hotel through a neighborhood best described as poor, but not disreputable. While our cab made its way down a side street, a radar gun-wielding policeman leaped out of the bushes down the block, pulled the trigger, and waved our immigrant cab driver to the curb. The offense, we soon learned, was going five miles an hour over the speed limit in a school zone… well after school was out and with no other children in sight.

Waiting for our ticket to be issued, we watched as another of Denver’s finest jumped out of a hidey hole on an intersecting street, fired off his radar gun, and proceeded to pull over another slow-moving perp. With such a low tolerance for excess speed, it struck me that what the police were doing had a lot less to do with protecting the public and much more with revenue harvesting. And that the school zone was just a cover for a bonus penalty on the ticket.

Being naturally curious, I subsequently poked around and confirmed my impression. Studies have proven that, in bad economic times, municipalities look to replace flagging revenues by turning the dial up on ticketing.

These studies show that, in the year following a downturn in revenues, municipalities issue “significantly more” tickets. Specifically, a 10% decrease in revenue growth results in a 6.4% increase in the growth of traffic tickets.

In Red Ink in the Rearview Mirror by the St. Louis Fed, the authors make some astute observations about the nature of this sort of revenue harvesting. The following excerpt is worth a read and some further pondering, as it paints a clear stripe down the road leading to your wealth.


The notion that local governments may use traffic tickets as a revenue tool has received considerable attention in recent years largely because of the growing use of traffic cameras to enforce red-light violations. While most studies find that red-light cameras have reduced right-angle collisions and red-light violations, some studies have also noted a significant increase in rear-end collisions following the installation of the cameras, making their net effect on safety a point of contention.

Combined with the fact that local governments frequently share in the ticket fines with camera manufacturers, many observers have concluded that red-light cameras are revenue generation devices rather than tools to improve public safety. In a more general sense, this view essentially holds that local traffic enforcement policies, much like other government policies, may be a function of two (often opposing) motives of public officials – political interests and public interests (Becker 1986; Saffer and Grossman 1987; Mixon 1995).

Given the limited revenue-raising options, erosion of property and sales tax bases, and a general distaste for tax increases by the public, local policy makers are under increased pressures to find alternative revenue sources (Tannenwald 2001; Crain 2003; Brunori 2006).

[…] Traffic tickets provide an attractive revenue source for local governments because the amount of revenue that can be generated is often unrestricted, they provide a mechanism to capture revenue from non-residents and non-voters, and most traffic offenses possess a low strict-liability threshold to achieve a conviction (as opposed to the higher criminal intent standard).
That reminds me of the reign of Caligula and how he instituted rules allowing for the wealth confiscation of anyone found less than enthusiastic about his particular form of government. Over time, this became a major source of revenue for the increasingly bankrupt state.

As was revealed more recently in California’s budget wrangling, the states and municipalities are experiencing rapid declines in their revenues. With property tax revenues plummeting, local governments – and there are about 90,000 local taxing authorities in the U.S. – are scrambling to find new revenue sources, including levying income and sales taxes.

And by turning up the heat on cab drivers that go five miles an hour over the speed limit.
Then there’s this from the British, who may have a great sense of humor, but it seems to be balanced by their lack of irony, given they provided the stage for Orwell’s 1984. According to the Times of London…
People who emit more than their fair share of carbon emissions are having their pay docked in a trial that could lead to rationing being reintroduced via the workplace after an absence of half a century.

Britain’s first employee carbon rationing scheme is about to be extended, after the trial demonstrated the effectiveness of fining people for exceeding their personal emissions target. Unlike the energy-saving schemes adopted by thousands of companies, the rationing scheme monitors employees’ personal emissions, including home energy bills, petrol purchases and holiday flights.

Workers who take a long-haul flight are likely to be fined for exceeding their annual ration unless they take drastic action in other areas, such as switching off the central heating or cutting out almost all car journeys. Employees are required to submit quarterly reports detailing their consumption. They are also set a target, which reduces each year, for the amount of carbon they can emit.

Those who exceed their ration pay a fine for every kilogram they emit over the limit. The money is deducted from their pay and the level of the fine is printed on pay slips. Those who consume less than their ration are rewarded at the same rate per kilogram.

(You can read the full article here.)
The whole carbon footprint issue and the massive taxes associated with it are literally nothing more than a ploy to keep the government and its supporters in (taxpayer-provided) high corn. That it is a ruse is clear when you examine a recent Bloomberg poll on what the public is actually concerned with…

(Thanks to Whatsupwiththat.com for bringing that poll to our attention.)

This is all headed in the wrong direction, and for the decidedly wrong reason of not wanting to address the underlying problem of too much, and too expensive, government.

The list of slippery acts of officialdom trying to boost its revenues at the expense of those with low political coverage could fill a book, but I will leave off by sharing an eye-opening video from ABC News, about the government grabbing safe deposit boxes and selling the contents.

If you want to avoid being stripped of your wealth, it is time to stand up. Alternatively, the point where you’ll want to consider voting with your feet is rapidly approaching.

Doing nothing, on the other hand, will just leave you as a sheep to the shearing pen, or worse.

Keeping an eye on the big trends is the main job of the Casey Report editors – even on their time off. Following their keen instincts what’s ahead and translating their findings into actionable opportunities to profit is the formula that has made subscribers to The Casey Report double- and triple-digit gains on a regular basis. How do they do it, and what’s in it for you? Click here to learn more.