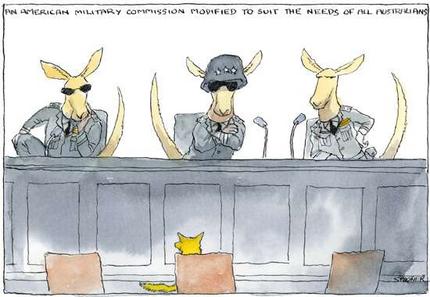 A new Addameer report explains how Israel uses military courts and imprisonment as instruments of repression.

Addameer's report is titled "Eyes on Israeli Military Court: A collection of impressions."

From 2009 - 2011, its volunteers and associates witnessed military court justice. Reflections of what they saw are discussed.

"A common thread throughout the impressions is how the security checks, the long waits before being let into the courtroom and the treatment of Palestinians by the Israeli military judges and officers portray the Israeli occupation in microcosm."

It's one among many aspects of Israeli apartheid. Institutionalized racism is official Israeli policy. Palestinians charged with offenses are guilty unless proved innocent. Doing so is virtually impossible.

Since 1967, an estimated 750,000 faced prosecutorial harshness. Few ever achieve justice. Around 20% of Palestine's population was affected. Up to 40% of males spent time in prisons.

Their crime was praying to the wrong God and wanting to live free. Israel calls it terrorism or terrorist related activity.

Since 2000, 8,000 Palestinian children were arrested. Some are young as 10. Occasionally they're even younger. Each year, about 700 are prosecuted under kangaroo court conditions. Most often it's for stone-throwing.

Some face prison time. All go through harrowing arrests, interrogations, various forms of abuse, and isolation from family members and legal help.

Military orders, regulations, and other diktats regulate all aspects of Palestinian life. Five categories of offenses affect them:

Legitimate political parties are criminalized. Hamas is affected. So is the Palestine Liberation Organization even though Israel engaged in so-called peace negotiations with PLO representatives since 1993.

Carrying or displaying a Palestinian flag is illegal. So are peaceful public demonstrations. "Pouring coffee for a member of a declared illegal association can be seen as support for a terrorist organization."

Palestinian prisoners and detainees are held in 19 prisons, four interrogation centers, and three detention facilities. All but one are illegally in Israel.

According to Fourth Geneva's Article 76:

"Protected persons accused of offences shall be detained in the occupied country, and if convicted they shall serve their sentences therein."

"They shall, if possible, be separated from other detainees and shall enjoy conditions of food and hygiene which will be sufficient to keep them in good health, and which will be at least equal to those obtaining in prisons in the occupied country."

They're largely isolated from family members and legal counsel. Permit permission is required to visit. Relatives are denied on spurious security grounds.

Hundreds of Palestinians are held uncharged without trials. They can rot indefinitely under gulag conditions. Many are persecuted in isolation. Torture is an instrument of repression. Children are as harshly treated as adults. Some never recover from trauma too extreme to bear.

Palestinians are tried in Salem or Ofer military courts. Both are in Occupied Palestine. Among those charged, 99.74% are convicted. Most spend time in prison. Plea bargains are commonplace. Innocent Palestinians plead guilty for lesser sentences.

(1) The right to prompt notice of criminal charges. Israeli military orders include no such requirement. Most often charges aren't disclosed until hearings or trials begin.

(2)The right to prepare a proper defense. During interrogations, detainees can be held up to 90 days with no access to lawyers or family members. Another 90 days can be ordered. Before and throughout prosecutions, lawyers face enormous obstacles communicating with clients in detention.

(3) The right to trial without undue delay. Palestinians can be detained up to eight day before being proceedings before a judge. During interrogation, it's 90 days. It can be extended an additional three months. They can languish on their own without help half a year.

(4) The right to interpretation and translation. Under Israeli law, detainees must be interrogated in their native language. Documents must also be prepared that way. In practice, confessions are nearly always in Hebrew. Many detainees are forced to sign what they can read or understand. Court proceedings are entirely in Hebrew. Inadequate translation is provided.

(5) The right to presumed innocence. Palestinians are judged guilty unless able to prove innocence. It's virtually impossible based on how proceedings are conducted throughout prosecutions. Automatic guilt is institutionalized.

It also replaced Military Order 132. It covered "judging juvenile delinquents." As a result, children at times young as six are arrested and treated like adults. When imprisoned, permanent trauma often results.

Military Order 1591 was replaced. It established administrative detention standards. It gave commanders authority to hold Palestinians up to six months with limitless extensions.

They're ordered based on "reasonable grounds to presume that the security of the area or public security require" them.

In other words, saying so without evidence justifies them. Justice Israeli-style replicates the worst police state practices. It's continued for decades without end.

As a result, an entire population is terrorized. Israel spurns international law with impunity. Millions of Palestinians suffer grievously. Virtually nothing is done to help them.

International law permits administrative detentions under narrowly defined circumstances for the short durations only. Under International Covenant on Civil and Political Rights (ICCPR) provisions, public emergencies "threaten(ing) the life of the nation" alone permit it.

Rarely ever should this procedure substitute for conventional prosecutorial proceedings. Israel uses it excessively and abusively as an instrument of persecution and state terror. According to Addameer:

Many Palestinians their lawyers defend "spent years in prison after being sentenced for committing violations, in accordance with military orders."

When their term ends, however, instead of being released, they're placed under administrative detentions on the pretext that they still pose security threats.

"Palestinian detainees have spent up to eight years in prison without charge or trial under administrative detention orders."

As explained above, children are treated like adults. The UN Convention on the Rights of the Child defines childhood as "every human being below the age of eighteen years."

Israel treats everyone 16 or older like adults. In practice, it makes no distinction whatever regardless of age. Children barely old enough to attend school face extreme harshness if arrested and prosecuted.

They're "regularly arrested indiscriminately and remanded in detention with little or no evidence...."

Military courts rely on soldier testimonies and forced confessions. Young children learn early in life what to look forward to henceforth. If convicted, they face two to six months in prison for misdemeanor stone throwing offenses whether or not they're guilty.

Depending on prosecutorial vindictiveness, sentences up to a year or longer can be imposed.

"Military Orders concerning the treatment of child detainees have few provisions that guarantee them greater protection other than those related to separation of children from adults in Military Courts, a provision which in itself is frequently violated."

No one is free from Israeli repression. Elected officials, teachers, and journalists are affected. So are medical professionals and lawyers.

Anyone suspected of activism is targeted. Public displays are prohibited. Military Order 101 criminalizes many civic activities. They include organizing and participating in peaceful protests.

Displaying Palestinian flags and other symbols are illegal. So is printing and distributing unauthorized political material. Anything against occupation is considered "political incitement" or a "security offense."

Firsthand impressions provided by Addameer volunteers and researchers confirm what's covered above. They detail shocking evidence of occupation harshness. Guilt for being Palestinian is common.

Israeli viciousness has no limits. Fundamental rights don't apply. Palestinians are denied them entirely. Police state justice is policy. So is state terror.

Institutionalized injustice substitutes for rule of law fairness. Anyone not Jewish experiences despotism at its worst.