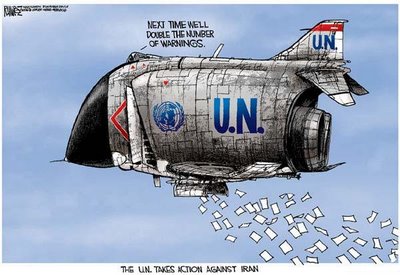 • "to save succeeding generations from the scourge of war;

• establish conditions under which justice....can be maintained;

• practice tolerance and live in peace; and

• (promote) economic and social advancement of all peoples."

It failed on all counts. It's largely a US imperial tool. It's been so from inception.

With few exceptions, the UN Human Rights Council (HRC) marches in lockstep with Washington. It does so shamelessly. Poland's Remigiusz Henczel serves as president.

America's waging hot war on Syria. It does so politically, economically and other ways against Iran.

"The money the special rapporteur has received from the US State Department has led to a situation that he cannot write about anything except their anti-Iran desires."

He "has no right to take a stance against the country he is assigned to. (He) repeats (anti-Iranian) words of the US and Israel."

Tehran categorically denies all charges. They're based on unreliable information. They reflect Western propaganda. They belie reality.

On February 28, HRC published his "Report of the Special Rapporteur on the situation of human rights in the Islamic Republic of Iran."

Baseless human rights violations were charged. They include "widespread and systemic" torture, as well as harassment, arrests and attacks on human rights defenders, lawyers and journalists.

"The prevailing situation of human rights in Iran continues to warrant serious concern, and will require a wide range of solutions that are both respectful of cultural perspectives and mindful of the universality of fundamental human rights promulgated by the treaties to which Iran is a party."

Shaheed tried having things both ways. On the one hand, he said Tehran made "noteworthy" women's rights "advances."

On the other, he claimed "recent policies prohibit women's access to a number of fields of study, further restrict women's freedom of movement, and current polices that continue to impede women's ability to hold certain decision-making positions in Government remain problematic."

He claims "unimpeachable evidence." Pro-Western and internal dissident sources supplied it. It's biased and unreliable.

She turns a blind eye on Israel. She ignores its worst crimes. She, Shaheed, and likeminded sources lack credibility. They're imperial tools. They're in lockstep with Washington. Their job is advancing its agenda.

On March 11, HRC headlined "Oral Update of the Independent International Commission of Inquiry on the Syrian Arab Republic."

It followed previous duplicitous reports. They're pre-scripted. They're predictable. They're one-sided. They lack credibility. They turn truth on its head.

They report what Washington wants to hear. They point fingers the wrong way. They blame Assad for Western crimes. They ignore credible eye-witness testimonies. They use spurious ones. They do so repeatedly.

They claim Syria's war is "civil." There's nothing civil about it. imported proxies are used. They're invaders. They're heavily armed, funded, trained and directed. They've been so from inception.

Most Syrians deplore violence. They oppose internal and external groups committing it.

Omitted was saying it's done defensively. Assad's obligated to do so. Syria was invaded. Other leaders would respond the same way. Failure would be grossly irresponsible.

It didn't explain. It glossed over insurgent crimes. They're too grave to ignore. It did so anyway.

Doing so, it said, "was to coerce (their) family members, some of whom were ostensibly fighting with anti-Government armed groups, to surrender."

"Multiple accounts alleged that the detained women were sexually abused."

No evidence whatever corroborates HRC claims. It largely whitewashes anti-government forces' crimes. It did so in previous reports. They point fingers the wrong way. It's done to please Washington.

Assad's wrongfully blamed for death squad massacres and other atrocities. Spurious accusations include the following:

"The brutality of the civil war in Syria has been amplified by the perpetration of massacres."

"According to 'corroborated' reports, Government forces executed between 52 and 90 prisoners, detained due to their affiliation to the opposition, in a makeshift prison in a former cultural center in Maarat Al Numan, Idlib, in October 2012."

"The mass killing of detainees took place in the context of an assault by Free Syrian Army fighters on Maarat Al Numan."

As they approached the checkpoint, "they heard heavy gunfire."

"(T)hey discovered multiple bodies of detainees who had been shot at close range. Survivors of the murder (said) Government soldiers killed the detainees in anticipation of the attack by the FSA to prevent their release."

Other accusations were similar. Assad's accused of "indiscriminate use of all available fire power assets, including artillery, air force assets and most recently, surface-to-surface ballistic missiles against insurgent held areas."

HRC points fingers the wrong way. It does so shamelessly and consistently. Its Syrian and Iranian reports lack credibility. They support Washington's agenda. They lie for power.