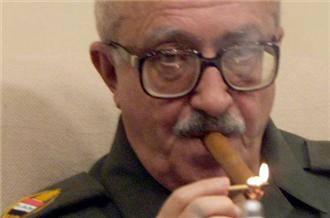 He's ill, isolated and fading. His life hangs in the balance. Washington likely wants him dead. He blames America, Israel and Britain. They bear responsibility for destroying Iraq. More on him below.

Medical neglect killed Slobodan Milosevic. In March 2006, he was found dead in his cell. He had heart and other health problems. He was denied proper treatment. It could have saved him. He might have lived many more years.

Days before his death, he wrote Russia's Foreign Ministry. He said the ICTY (International Criminal Tribunal for the former Yugoslavia) wanted him dead. So did Washington and key NATO partners. They want Aziz gone and forgotten. He's dying from neglect.

In summer 2010, he gave his first interview. He'd been in prison nearly seven and a half years. He committed no crime, he said. He's victimized by US imperialism.

"All decisions were taken by president Saddam Hussein. I held a political position, I did not participate in any of the crimes that were raised against me personally. Out of hundreds of complaints, nobody has mentioned me in person."

"Being a member of the government, I had a moral responsibility to defend the government. If you go back to the history, I asked Saddam Hussein not to invade Kuwait, but I had to support the decision of the majority."

"When the decision was taken, I said to him, this is going to lead to war with the US and it is not in our interests to wage war against the US."

"But the decision was taken. I was the foreign minister of the country and I had to defend the country and do everything possible to explain our position. I stayed on the side of right."

"There is nothing here any more. Nothing. For thirty years Saddam built Iraq, and now it is destroyed. There are more sick than before, more hungry."

"The people don't have services. People are being killed every day in the tens, if not hundreds. We are all victims of America and Britain. They killed our country."

Iraq pre-2003 no longer exists. Washington and NATO allies destroyed the cradle of civilization. Aziz is guilty by association. He regrets surrendering to US authorities. He did so on April 24, 2003. He said goodbye to Saddam days earlier.

"Through an intermediary, I contacted the Americans," he said. "If I could return to that time, I wish I would be martyred." He's endured a long ordeal. He's ill, weak and fading.

On April 3, The BRussells Tribunal issued the following statement:

"The whole Western political class and human rights bodies should be held responsible if he dies in custody, because of their inaction and negligence."

His son Ziad wrote to the BRussells Tribunal. "We urge politicians,  Human Rights Organisations and the media to finally take some decisive action for the release of Tareq Aziz and all other political prisoners," he said. "Human rights should be defended."

"It has been almost 10 years since my father had been taken into custody by the American forces."

"It is also the anniversary of the assassination attempt he survived in 1980."

It killed civilian bystanders. It "was planned and executed by the same people who are ruling Iraq today, and who are planning to execute him again, slowly and this time with nobody to see."

He's imprisoned in Baghdad. He suffered his fourth stroke. He "fell on the floor in the middle of the night and was left in his cell for the whole time until morning."

"He has not been visited by a doctor, nor was he taken to the hospital, nor was he offered any medical attention of any kind since he had the stroke."

"His ability to speak coherently is basically diminished. My mother and sisters can barely make out what he" says.

He has "inflammations and diabetic ulcers on his feet and legs." Without immediate treatment, gangrene and amputations could follow.

Ziad wants the international community to know. "My father's situation is deteriorating by the day, and I am truly afraid of what the future might hold if he is not provided with the proper care and treatment he desperately needs immediately."

In May 2009, Hans von Sponek addressed conditions in Iraq and Aziz's illness. He said:

"The Iraqi President Jamal Talabani recently spoke of the democracy that had been introduced in his country due to the US invasion of 2003."

"Some Iraq observers, who do not know Iraq and probably understand only little about democracy, have hastily confirmed this."

"For them, the decreases of bloody attacks and of the number of victims prove that the six-year occupation was worthwhile."

"However, dead people cannot react, but their descendants can do and they do so. Twenty per cent of the Iraqi population have become refugees in their own country or live under the most incredible circumstances as tolerated but unwanted people in Syria, Jordan or in countries farther away."

"Among them is the family of the former deputy Prime Minister, Tariq Aziz. They live scattered in Jordan and in Yemen and fear for their patriarch."

"Tariq Aziz has been seriously ill for a long time. Together with other political prisoners like the former Oil Minister, Dr. Amer Rashid and the Minister of Trade, Dr. Mohamed Medhi Saleh, he is kept imprisoned at the US Camp Cropper in the outskirts of Bagdad."

"International legal obligations do not signify anything in this context. The letter of Ziad Aziz, the oldest son of Tariq Aziz, to a concerned friend abroad makes clear, what the situation of political prisoners and their democratic fundamental rights in Baghdad is like."

Separately, von Sponeck and Halliday said they know Aziz. They worked with him. He's a "highly motivated Iraqi nationalist."

"He cooperated with the United Nations fully whenever he believed that the benefits of the humanitarian exemption for the Iraqi people could be enhanced."

He and Halliday want him released. In 2005 and early 2007, they raised concerns. They "made public appeals for his release on humanitarian grounds." They made subsequent attempts to do so.

None's forthcoming. He may not last much longer. America and complicit allies want him gone. They're killing him slowly. Death by willful neglect constitutes premeditated murder.