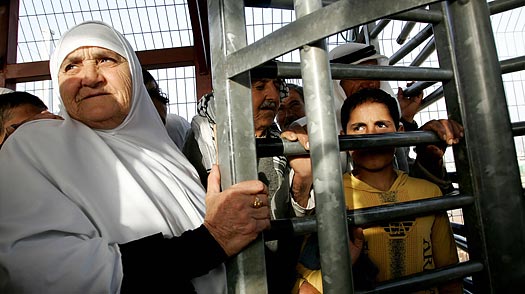 America and Israel partner in injustice. They prioritize it. Imperial lawlessness is policy. So is state terror. Many examples explain. They're commonplace daily.

Gaza border areas were attacked. So were fishing boats within two nautical miles from shore.

Israel mistreats Palestinian children like adults. Some aged 10 or younger are terrorized. On April 5, a 14-year-old Palestinian-American boy was arrested.

Eight assault-rifle wielding soldiers accosted him. They broke into his home pre-dawn. The entire family was terrorized. Stone-throwing was alleged. True or false hardly matters.

Mohammed Khaled is one of many Israeli victims. He's lawlessly detained. He's been harshly interrogated. His dental braces were broken.

Israeli mistreatment of children is longstanding. It's widespread and institutionalized. International law is violated. Bail is denied. Coerced confessions are demanded.

Youssif Hassan Khalil Balousha recalls what happened. "Everything we owned was destroyed in the attack," he said.

He and his family members were sleeping. Around 1:45AM, his eldest son awoke him. Israeli missiles struck their neighbor's house.

"We decided to evacuate" just in case, he said. He recounted what happened next. "When the attack happened, I was standing on the doorstep of my house."

"My son and my nephew were there too. It felt like a big earthquake, and some debris from my house fell on us. I fainted due to the impact of the attack."

"I was taken to the hospital, but I don't remember it. At around 3 am, the doctors in the hospital managed to wake me up. My son came and told me that our house had been destroyed in the attack."

"I was devastated, and I couldn't believe what he was saying. I was discharged from the hospital at 5 am. I sent some of my family members to my son-in-law's house, and some others took shelter with neighbours whose houses had survived the attack."

He later assessed the damage. "It was a nightmare. Everything we owned - our belongings, clothes, furniture - had been destroyed in the attack. It was extremely painful, as if all of my family's hard work had vanished in a few hours."

He's had problems finding an alternative residence. He's staying in a Beit Lahiya apartment. It's small and inconvenient. He can't afford more. He's unemployed. He's struggling to get by.

Like thousands of other Palestinian victims, he's largely on his own. He's lucky to be alive. He may not be next time. He's not sure from day to day what's next.

Around 130 prisoners are hunger striking. They're doing so for justice. They haven't ingested food for over two months. They've been lawlessly held for years. They're prefer martyrdom to indefinite persecution. Longterm abstinence proves it.

On April 13, guards violently attacked them. They were moving them to single-cell confinement.

"Less than lethal rounds" were fired. It's unclear if live ammunition was used. Pentagon reports are duplicitous. Lies substitute for truth.

According to Navy Captain Robert Durand:

"Some detainees resisted with improvised weapons, and in response, four less-than-lethal rounds were fired."

Officials say no guards or detainees were seriously injured. There's no way knowing for sure. Reliable information is suppressed. Washington prefers not acknowledging Guantanamo exists. It denies what remains ongoing.

Council for one detainee, Cindy Panuco, said it's virtually impossible for prisoners to obtain makeshift or other type weapons.

They have little more than ballpoint pen inserts. They're plastic, small, and straw-like. They're unable to inflict harm.

Regular searches seize anything suspicious. Prisoners are defenseless. Guards are omnipotent. They have whatever weapons and other equipment they need.

Crackdowns are hard. They're merciless. America operates that way. Harshness is longstanding. International, constitutional, and US statute laws are spurned. Unaccountability follows.

Carlos Warner represents several prisoners. He accused the Pentagon of "escalating the conflict." He said so for good reason. Barbarism is official policy.

General Geoffrey Miller ran Guantanamo from November 2002 until April 2004. He then was in charge of Abu Ghraib and other Iraq torture prisons. He stayed in command until his 2006 retirement.

He was awarded the Defense Distinguished Service Medal (DDSM). In 1970, Nixon's Executive Order established it. It's America's highest non-combat award.

It's largely for senior officers "whose exceptional performance of duty and contributions to national security or defense have been at the highest levels."

Washington considers crimes of war, against humanity, genocide, torture, and other forms of abuse "distinguished" service. So do Nobel committee members.

Horrendous crimes against humanity continue. Innocent victims suffer. They do so largely out of sight and mind. Institutionalized lawlessness is policy. Where this ends who knows.