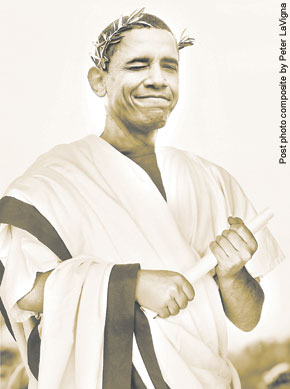 It didn't surprise. His Senate voting record warned. It was way right-of-center. It showed where he stands. His tenure as president does writ large.

He's no man of the people. He's soulless, anti-progressive, anti-populist, anti-labor, anti-fairness, anti-dissent, anti-democratic, anti-freedom, anti-civil and human rights, anti-environmental sanity, and anti-government of, by and for everyone equitably.

His rap sheet exceeds the worst of his predecessors. He's hard-right, reactionary, belligerent, pro-business, and pro-war.

He's waging it nonstop. He's doing so on humanity. He's done it throughout his tenure. He assures lots more ahead.

He prioritizes advancing America's imperium. He seeks unchallenged global dominance. He's doing so through the barrel of the gun. He's pistol-whipping countries into submission. He's doing it by destroying one after another.

He's waging war on peace. He claims it's for peace. He lied saying so. He's a serial liar. He's a moral coward. He's a war criminal multiple times over. He heads a repressive homeland police state apparatus.

He's done what his supporters thought impossible. He's done it at home and abroad. He exceeds the worst of George Bush.

He wrecked the economy. He looted America's wealth. He handed it to Wall Street crooks. He rewarded other corporate favorites. He did it at the expense of popular needs.

He consigned growing millions to impoverishment, unemployment, underemployment, homelessness, hunger, despair and deprivation. He doesn't give a damn what they deserve. He's mindless of their needs.

He destroyed hard won labor rights. He wants education commodified. He wants it made another business profit center.

He governs lawlessly. He does so for powerful monied interests. They own him. He delivered at the expense of ordinary Americans deserving better.

He decides who lives or dies. Habeas and due process rights are gone. Diktat power rules. It affords justice to no one ordered killed, arrested or otherwise abused.

One-man rule replaced them. Obama usurped unchecked authority. He can order anyone arrested and imprisoned for life without charge or trial. He can do so on his say alone.

US citizens are vulnerable. They can be indefinitely held uncharged without trial. They can be imprisoned based solely on suspicions, baseless allegations or none at all.

US military personnel can arrest them. They can do so at home or abroad. Anyone can be disappeared. They can be thrown into military dungeons. They're afforded no rights. They can't appeal.

They can rot there forever. They can be brutally tortured. They can be assassinated on Obama's say. No one anywhere is safe.

Torture is official US policy. So is global state terror. Policy prioritizes killing by drones, death squads, or other means.

Eliminating America's enemies alone matters. Whether real or imagined makes no difference. America's unfit to live in. Everyone is potentially vulnerable.

America never was beautiful. It's no democracy. It's a convenient illusion. It's pure fantasy. Freedom's on the chopping block for elimination. Constitutional rights don't matter. They seldom did earlier. They don't now.

Unconstitutional mass surveillance is official US policy. Big Brother watches everyone. What Bush began, Obama accelerated. He did so straightaway in office. He lied claiming otherwise.

Free societies don't tolerate these practices. Obama authorized them secretly. He subverted constitutional law. He violated the public trust. He broke every major campaign pledge made.

He defends the indefensible. Americans have never been less safe. Freedom's more illusion than reality.

Obama's done more to subvert rule of law principles than any previous president. He made freedom a four-letter word.

He's waging war on humanity to achieve it. He's slaughtering millions in the process. He's heading America for full-blown tyranny and ruin. He risks mass annihilation doing so.

All wars are based on lies. America's heading for more. Syria's in the eye of the storm. Iran's turn awaits. Humanity's survival is at stake.

Why not when it's considered peace. Real peacemakers are vilified. So are social democrats. Doing the right thing is called wrong.

They authorized attacking Syria. They did so illegally. They did it mindlessly. Expect full Senate approval to follow. Expect House members to go along.

He represents the worst of imperial lawlessness. He risks ending life on earth. People power alone can stop him. Grassroots activism more than ever is needed.

Organized people can beat imperial warmakers. It takes time, patience and commitment. He takes willingness to do the right things. It takes knowing there's no alternative.

It's either taking a stand for peace or perish! There's no in between. If that's not motivation enough to act, what is?