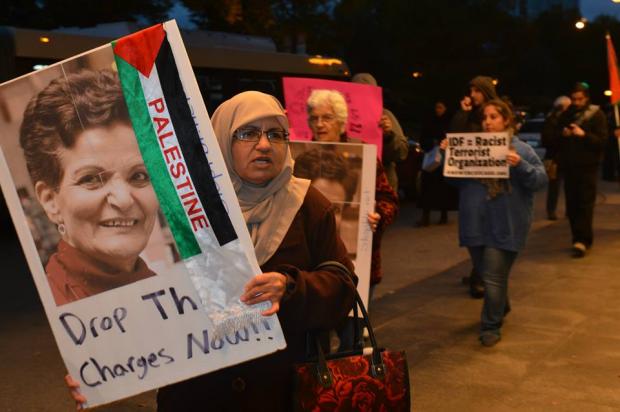 In 2013, the Chicago Culture Alliance (CCA) honored her with its "Outstanding Community Leader Award."

CCA called her a woman who "dedicated over 40 years of her life to the empowerment of Arab women, first in her homes of Palestine, Jordan, and Lebanon, where she was an activist, and then the past 10 years in Chicago."

She was born in Palestine. She endured Israeli harshness. She was lawlessly convicted for alleged membership in the Popular Front for the Liberation of Palestine (PFLP). She committed no crimes.

From 1969 - 1979, she languished unjustly in Israeli prisons. She was treated horrifically. She endured torture and sexual abuse.

Her sentence was commuted as part of a prisoner release deal. She was deported to Lebanon.

She "dedicated ten years to the Chicago Arab-American community, working with women on issues ranging from promoting literacy and political education to addressing domestic violence and anti-Arab and Muslim sentiment."

She's "a living legend in the eyes of thousands across the world. (She's) one of our precious elders. (She) leads by example, and organizes block to block and house to house."

On October 22, she was arrested in Chicago. It was on behalf of Eastern District of Michigan federal prosecutors. It's the jurisdiction where she applied for citizenship.

On November 13, she was arraigned. Judge Laurie Michelson entered a not guilty plea on her behalf. She was released on bond.

She's wrongfully charged with Unlawful Procurement of Naturalization. It pertains to allegedly lying on her 1994 immigration application.

She didn't mention being arrested by Israel 45 years earlier. Occupied Palestinians have no rights whatever.

Muslims are war on terror scapegoats. They're vilified for being in America at the wrong time. They're denied justice.

They're dehumanized, spied on and framed. They're tried on secret evidence. They're convicted on bogus charges. They're given long sentences. They're treated harshly as political prisoners.

Islamic tenets are ignored. The Koran teaches love, not hate; peace, not violence; charity, not selfishness; and tolerance, not terrorism.

It doesn't matter. Muslims are public enemy number one. They're stereotypically portrayed as dangerous gun-toting terrorists. They're lawlessly targeted. They're vilified for praying to the wrong God.

They issued the following statement on her behalf, saying in part:

"In the last year alone, Palestine Solidarity Legal Support, in partnership with the Center for Constitutional Rights, and in collaboration with the National Lawyers Guild and other organizations, has documented over 75 cases of intimidation and legal bullying."

"These include perceived surveillance, FBI contacts and discriminatory enforcement of laws against advocates for Palestinian rights."

"Rasmea's arrest and indictment must be viewed within this wider context of widespread attempts to intimidate people into silence on one of the most pressing human rights issues of our time."

Her "indictment is also an illustration of increasingly draconian enforcement of immigration laws, which have left immigrant communities devastated at the hands of Obama's Department of Homeland Security."

"As students, we stand in solidarity with Ms. Yousef. We consider both her arrest and the charges against her to be illegitimate, and see them for what they are: acts of political repression."

Rasmea is a "beloved member of Chicago's Palestinian community." Her arrest "is part of an ongoing campaign of repression by the US government against those organizing in opposition to Israel's crimes against the Palestinian people."

Twenty-three victims were subpoenaed to testify before grand juries.

They have extraordinary investigative powers. Prosecutors take full advantage. They manipulate proceedings abusively. They do so for outcomes they wish. Victims are vulnerable to bogus indictments.

Anyone can be subpoenaed for any reason or none at all. Proceedings are conducted in secret. Disclosure is prohibited without judicial authorization.

Victims have no protections against false witness testimonies. They're defenseless. They're vulnerable to prosecutorial indictments.

Innocence is no defense. Justice is routinely denied. Political intimidation continues. Rasmea is one of many victims.

If convicted, she faces up to 10 years in prison. She can be fined. Her citizenship can be "revoke(d), cancel(led), and declare(d) null and void."

Her next court appearance is for discovery and related matters. No date was set. Her trial will follow. Detroit-based Eastern District of Michigan US District Court Judge Paul D. Borman will preside.

In 1970, he joined the People's Law Office. He represents victims of police state injustice. In 2003, he was chosen Public Interest Lawyer of the Year.

He's a past Center for Constitutional Rights Legal Director. He said Rasmea's situation "appears to be the Department of Homeland Security behaving in a discriminatory fashion, targeting Arabs, Muslims and Palestinians for selective prosecution."

Other Chicago area Palestinians were wrongfully targeted. Their ordeal continues.

"We know that the US government works closely with Israeli officials, and therefore it is a certainty (it) knew of (Rasmea's) legal history at the time she emigrated and at the time she applied for citizenship," said Deutsch.

"Why then is she being charged now after 20 years of model citizenship and good deeds in service of her community?"

He cited an August ACLU report titled "Muslims Need Not Apply." It exposes the US Immigration Services' "Controlled Application Review and Resolution Program."

It "targets Muslims, Arabs, Middle Eastern, and South Asian immigrants to deny them their requests for citizenship," said Deutsch.

"As a person of color, I can tell you I've experienced racism in this society. I'm proud to stand with Rasmea Odeh."

Arab Jewish Partnership for Peace and Justice in the Middle East

Committee for a Just Peace in Israel and Palestine

Committee for Open Discussion of Zionism

INCITE! Women and Trans* People of Color Against Violence

Jews for Palestinian Right of Return

National Students for Justice in Palestine

Unitarian Universalists for Justice in the Middle East

US Campaign for the Academic and Cultural Boycott of Israel

US Campaign to End the Israeli Occupation

Women of Colour Collective at the McGill Faculty of Law

Qualified Immunity Is How the Police State Stays in Power