Topic/Speaker: Join us Saturday, May 4th, 2019, for the next installment of the Arizona Breakfast Club. Our featured speakers will be Patrick Wood (Editor-In-Chief of Technocracy News & Trends) and Ernest Hancock (Publisher of Freedom's Phoenix) on 'Greater Phoenix Smart Region Initiative' Taking Root In AZ, systematic implementation of Agenda 21/Sustainable Development Policies

In 1974, Trilateral Commission member and academic Richard Gardner wrote an article "The Hard Road to World Order" for Foreign Affairs magazine, predicting the future of the Commission's self-proclaimed New International Economic Order. Gardner spoke of an "end-run around national sovereignty", a "booming, buzzing confusion" and building it from the "bottom up" rather than attempting an "old-fashioned frontal assault." After almost 45 years, it is time to examine the record. In Technocracy: The Hard Road to World Order, Wood traces the steps and developments that led to the United Nations' establishment of Sustainable Development as an outgrowth of historic Technocracy from the 1930s. UN programs such as 2030 Agenda, New Urban Agenda and the Paris Climate Agreement are all working together to displace Capitalism and Free Enterprise as the world's principal economic system. As a resource-based economic system, Sustainable Development intends to take control of all resources, all production and all consumption on planet earth, leaving all of its inhabitants to be micro-managed by a Scientific Dictatorship. Topics covered include the devolution of federal governments combined with the rise of global Smart Cities. Tools are examined, like ubiquitous surveillance, collaborative governance, Public-Private Partnerships, Reflexive Law, Fintech, including crypto currencies and the drive toward a cashless society. The spiritual aspect of Sustainable Development is also explored as an important component of manipulation. Looking underneath the cover of globalization, Wood shatters the false narrative of a promised Utopia and exposes the true nature of the deception used to promote this new economic order. Those elite who hate the bedrock of American liberty and its time-tested Constitution have pulled out all the stops to destroy both, and it's time for citizens to stand up to reject them. As always, Wood closes with the nature of effective resistance and the tools that can help to achieve success.

So far, every Amazon reviewer has awarded my new book FIVE stars! Check out the reviews to see why!

The topics covered in The Hard Road are crucial to understanding how and why the world is changing: 5G, Smart Cities, Global Cities, Mass Surveillance, Fintech, Cashless Society, Cryptocurrencies, Regionalization and Collaborative Governance.

"In short, the 'house of world order"'will have to be built from the bottom up rather than from the top down. It will look like a great 'booming, buzzing confusion,' but an end-run around national sovereignty, eroding it piece by piece, will accomplish much more than the old-fashioned frontal assault."

In other words, 'death by a thousand cuts.'  This is exactly what has happened and it continues at breakneck speed all around the world and especially in the U.S. 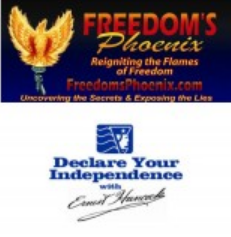 -Publisher of Pirates Without Borders

-Host of the Declare Your Independence with Ernest Hancock Radio Show

Ernest created PiratesWithoutBorders.com to promote the DeCentralization of… Everything! Ernest is a longtime Libertarian and is known for many things, but he kick-started the r3VOLution by going around the country during the '08 and '12 election cycles, freeing minds and inspiring many people to think outside the system.

Ernest has longtime relationships with activists across the country. Known as a radical, Ernest is always engaging, entertaining, and his brand of freedom is unforgettable to all who meet him. "Freedom's The Answer, What's the Question?!"