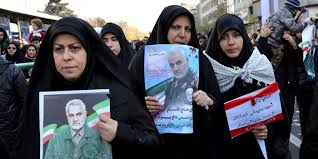 His assassination had nothing to do with a threat by Iran or him to US national security.

It had everything to do with his success in combating US-supported ISIS and likeminded terrorist groups.

Days after Trump's crime against humanity, he defied reality with the following Big Lie, saying:

"Soleimani was actively planning new attacks, and he was looking very seriously at our embassies, and not just the embassy in Baghdad (sic)," adding:

Separately, Trump claimed that he ordered Soleimani's assassination "because (he was) looking to blow up our (Baghdad) embassy (sic)."

He provided no evidence of a Soleimani threat. None existed then or by anyone in Iran or elsewhere now.

All US claimed threat to its national security are invented, not real.

Trump's false claim about acting in self-defense because of an "imminent" threat fooled no one.

Pompeo repeated his Big Lie. Claiming the Trump regime targeted General Soleimani for elimination because he and Iran threatened US regional interests turned truth on its head.

Last January, he was in Baghdad on a diplomatic peace mission.

He was and remains widely respected and revered in Iran, other regional countries and elsewhere.

He was a renown freedom fighter for regional peace and stability — his mission polar opposite endless US wars of aggression against nonthreatening states.

Elevated to martyr status by the Trump regime's murder, he's larger than life in death than when alive.

On Wednesday, Iran's Ayatollah  Ali Khamenei vowed further revenge for Soleimani's assassination beyond Iran's strike against the US Ain al-Assad airbase in Iraq five days after his brutal killing.

It "will certainly take place," Iran's Supreme Leader stressed — in a way, at a time of the country's choosing.

"We're not engaging in a war of words. (W)e'll leave everything to the field of action," he added.

RT interviewed Soleimani's daughter Zeinab, her remarks airing Wednesday. Below is some of what she said:

"There's no difference between Biden and Trump."

"They are the same guy. They are following the same policy. There's no difference between them."

"Trump ordered the killing of my father, but Biden supported that, so there's no difference."

"My father" disrupted Washington's imperial agenda, so the Trump regime "killed him."

Trump "is the monster, not my father. My father did his job so well and made them so angry."

"The problem we have with America is their policy. This will not change" with an incoming regime.

"They are the same people, with the same mind, the same way," the same actions. "And each one is worse than the other one."

"After killing my father, America thought that everything will be stopped because they killed (him), the power of the Middle East" and supporter or regional sovereignty, free from foreign occupation.

US officials "are so wrong. They are so wrong in thinking this will be the end of General Soleimani. This is the beginning."

They also killed Iranian nuclear scientist Mohsen Fakhrizadeh in late November and others earlier, along with waging sanctions war on the Islamic Republic's people.

Those responsible are "not human," said Zeinab.

"They've killed (Fakhrizadeh) so easily in his own country in front of…his wife."

"How dare they come to our country and kill people so easily in the street?"

The US is its own worst enemy, an unparalleled global menace.

It's waging war on humanity at home and abroad, exploiting most people to benefit its privileged class.

Zeinab was right calling Trump a monster. It's true about most US leaders and others in high office throughout the country's history.

It's mostly true about US rage to control planet earth, its resources, and all its life forms — by brute force if other tactics fail.

That's what the scourge of US imperialism is all about.

What can't go on forever, won't. History's dustbin awaits its arrival, the fate of all empires in world history.

On that glorious day, people everywhere yearning to breathe free will exhale in relief for the first time since imperial USA emerged on the world stage.