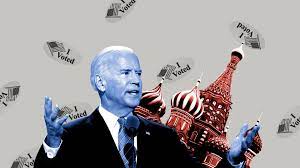 The Biden regime is stacked with a rogue's gallery of belligerent hardliners.

Hostile to world peace and stability, they never met a nonbelligerent/nonthreatening nation free from US control they didn't want smashed.

Familiar names and faces are back, figures responsible for raping and destroying Syria and Libya.

Supporting Plan Colombia aid, they were complicit with massacres, disappearances and torture of regime opponents.

Their anti-Sino/Russia policies risked confrontation with both countries.

Back for an encore under selected, not elected, Biden/Harris, maybe they'll destroy planet earth by their reckless agenda to own it.

"(W)e are concerned by recent escalating Russian aggressions in eastern Ukraine (sic), including credible reports (sic) that have been emanating about Russian troop movements on Ukraine's borders and occupied Crimea (sic)."

In stark contrast to endless US wars on invented enemies, risking new ones, exploiting ordinary Americans, provocatively occupying other nations, and waging war by other means on many countries, Russia fosters world peace, stability, and cooperative relations with other nations, confrontation with none — except in self-defense if necessary, its UN Charter right.

He lied holding Moscow responsible for the deaths of Kiev conscripts along the contact line with Donbass.

Destabilization and endless wars on humanity in multiple theaters is how the US operates — not Russia or other nations free from the scourge of US imperial control.

US provocations occur worldwide on a virtual daily basis — none by Russia, a peacemaker, not a belligerent like US hardline regimes.

Washington's "Ukrainian counterparts" enforce tyranny over governance of, by, and for everyone equitably.

They've been waging intermittent war on Donbass for the past seven years — serving US imperial interests.

If they permit Biden regime hardliners to push them for full-scale war that threatens Russia's security, its superior forces could smash Ukrainian conscripts into submission in a few days.

The US doesn't give a damn about Ukrainian interests or rights of its people.

The Biden regime is using Ukraine's military as a proxy force to advance its imperial aims against nonbelligerent Russia.

No "intimidation and aggression" by its military exists, no "provocative" troop movements, no occupation of Crimea.

Price lied claiming otherwise. Like most others in Washington, he's a serial liar/suppressor of hard truths.

They're entirely within its own territory, its legitimate right under international law.

Turning reality on its head, she falsely accused Russia of "aggression and escalations in eastern Ukraine (sic)."

No Russian buildup near its border threatens invasion.

On Monday, Russian Deputy Foreign Minister Sergey Ryabkov stressed that its military threatens no one.

It's taken defensive steps "it considers necessary," ignoring fake "signals" of concern by the US and its imperial partners.

On Tuesday, Ryabkov said "we have had contact with the (Biden regime) on the situation in the Donbass, and we have exhaustively explained to their side what is happening," adding:

"Washington should be concerned about the consequences of" pushing its Kiev proxy to escalate war near Russia's borders.

"This basically translates to Defend Europe" against a nonexistent Russian threat — invented by the US to advance its imperial aims.