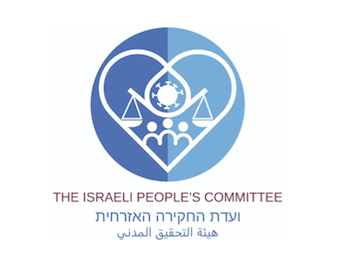 The Israel's Peoples Committee (IPC) "was formed by (Jewish state citizens) whose goal is to encourage people to share and relate their experience in regard to civil rights violations, any damages or discrimination arising from the current crisis, ethics violations and suspected governmental and institutional criminality."

Since early last year, Israelis endured "an institutionalized campaign of intimidation by state leadership and health system" officials" to be jabbed for flu/covid, the IPC explained.

"(A) government dictatorship (breached) the most basic human rights."

"(L)ockdowns" and other flu/covid related mandates "irreversibly damaged all life systems" — based on Big Lies and mass deception.

Last May, the IPC reported that "never ha(ve) (inoculations for anything) injured so many."

Yet government officials and Israel's health ministry defied reality by "brag(ging) that (the country is) a global model for nationwide" flu/covid mass-jabbing.

Widespread adverse events in the country have been "ignored" and suppressed, Israelis lied to about the hazards of mass-jabbing.

"The…gap between…reality and information published by the Israeli ministry of health and by the Israeli media raises concern of a dangerous deception not only of Israeli citizens but of citizens of the entire world, who view Israel as the research laboratory of Pfizer's" experimental mRNA covid drug.

"Such a deception…could create additional cycles of harm to humans around the globe."

"Deception and concealment (caused large-scale) disability and loss of life."

Officially reported numbers of adverse events from flu/covid jabs (may be only 1%) of the real picture," including numbers of deaths.

January to March 2021 "was the deadliest one in the last decade, with the highest overall mortality rates."

A second jab heightens the risk of serious harm or death.

Increasing numbers of adverse events "indicate damage to almost every system in the human body."

"They also highlight the incomprehensible gap between official Israeli media reports and what is really happening, enabling a 'two worlds' situation due to journalistic failure to sense, identify and report on what is actually happening in citizens' real-life."

IPC data of adverse events from flu/covid jabs shows that officially reported ones may be only "1% of the actual number."

As of early spring, "around 250,000 people did not show up (for) a second (jab), despite massive social and occupational pressure of the green passport."

"We believe that the majority of them decided (no more) due to experiencing adverse effects (from) the first" jab.

Nations with the highest percent of their populations jabbed experienced the most adverse events, including deaths.

"25% of all cardiac events occurred in young people below the age of 40, the most common diagnosis in these cases being myocarditis or pericarditis."

"Additionally, a high prevalence of massive vaginal bleeding, neurological, skeletal and skin damages have been observed."

There are "many thousands of unreported cases."

"We get growing numbers of reports about this phenomenon from medical staff within hospitals."

Israel is continuing mass-jabbing "at all costs."

Along with way-undercounting, Israeli doctors and hospitals are pressured to attribute jabbing adverse events to something completely different.

"This is, of course, just a smoke screen aimed at preventing the truth, which ruins the essential foundations of differential diagnosis and brainstorming based medicine, and whose consequence is a breakdown of normal and scientific medicine."

Because of "the extent and severity of post-(jabbing) adverse events we are witnessing, we would like to express the committee's definite position that (jabbing) children is both dangerous and lacking any medical basis."

In the US, more post-jabbing adverse events, including deaths, were reported by the CDC "than from all other vaccines combined over the preceding three decades."

"Of all the injustices that have been inflicted upon the Israeli citizens during the (flu/covid jabbing) campaign…is the health injustice caused by the malfunctioning and neglectful conduct in regard to the monitoring and reporting of adverse events from the Pfizer" RNA covid drug.

"(T)here is an almost complete concealment of adverse events associated with (it), which appears to be tendentious and has led to a deception of Israel's citizens, exposing them to significant health risks and even unnecessary mortality."

"This practice of concealment is orchestrated by the ministry of health, with vast cooperation of the entire health system, and under the auspices of mainstream media."

Like Americans and others in the West, Israelis have been lied to and deceived by government officials and media through "dangerous acts of silence and concealment."

"Given the massive list of side effects, which contains only a small fraction of the reality…we can only conclude that (what's going on) is a type of social psychosis driven by a government whose values of human compassion and loving kindness are non-existent."

Given the above reality, Israelis "have no choice but to rely on their own values, determine their own priorities, and act to the best of their ability to deal with the new situation, while maintaining an uncompromising struggle for their own sanity and the restoration of social sanity to our country and the worldwide."

"This is what we in the People's Committee have undertaken to do."

"For us, the battle has just begun."

Their mission is truth and full disclosure on all things flu/covid — especially adverse events and deaths from mass-jabbing.

On Thursday, Senator Ron Johnson said the following about Big Lies and mass deception on all things flu/covid:

"The American people deserve the truth."

"(T)he people of the world deserve the truth on this and unfortunately because of the cabal between social media, mainstream media, and our federal health agencies and big government, we're not getting the truth," adding:

"I just received this morning data out of Israel."

"But the new cases of (flu/covid) in Israel are about 84% with (jabbed)  individuals."

"It certainly is looking like the Pfizer" flu/covid drug is the problem, not the solution.