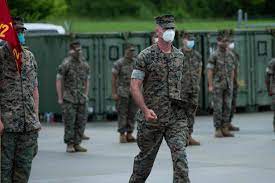 The most ruthlessly reckless regime in US history finds new ways to reveal its contempt for health, constitutional rights and respect for human dignity.

It wants US military members unwilling to destroy their health from toxic flu/covid jabs dishonorably discharged and denied rights afforded others when leaving active duty.

Punitive dishonorable discharge — following a General Court-Martial — virtually always is for the most extreme wrongdoing.

Dishonorably discharged military members lose all benefits afforded other vets, including medical care for those unable to afford a preferable alternative.

They're forbidden to own a firearm, work for the government, get bank loans, be able to vote, or get other federal assistance.

They're hampered in finding private employment with firms that check military records before making job offers.

The mark of Cain is permanently harmful, a forever stain on the character of imposed individuals — even when unjustly.

According to Vet Verify, dishonorable discharge from the US military "is universally regarded as shameful…"

"(M)any Americans have (justifiable) reservations about taking (an experimental jab) that has only been available for less than a year."

Failing to dishonorably discharge mass-jabbing refuseniks would "detract from readiness (sic) and limit a commander's options for enforcing good order and discipline (sic) when a service member fails to obey a (lawless order the Biden regime falsely called) lawful."

Claims by the White House that flu/covid jabs are safe and effective are refuted by science.

In response to the above, GOP Rep. Mark Green who sponsored Section 720 said the following:

"I am disgusted that the Biden (regime) is trying to gut my (NDAA) amendment…that prevents anything but an honorable discharge for service members who refuse to get" flu/covid jabs.

"(E)very (Dem) on the House Armed Services Committee agreed to my amendment."

"It is tragic and horrifying that the Biden (regime) can't respect the rights of our military that every House (Dem) on the Committee voted for."

"It's an insult to our servicemen and women who have served with honor to dishonorably discharge them for refusing" flu/covid jabs," adding:

"Forcing all service members, including pregnant women and those (with natural immunity) to (be jabbed) is one more example of (the Biden regime) putting politics ahead of science."

"(T)his crucial bill (will) ensure the proper steps are taken by the military chain of command in response to those seeking exemptions from" jabs they have a legal right to refuse.

Together with the above four senators, Mak Green stressed that military member refuseniks "should not receive anything other than an honorable discharge."