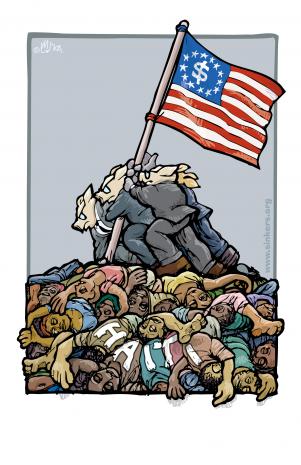 A year ago, people wandered the streets dazed, searching for loved ones. Lost power cut communications except by satellite phone. Haiti's quake vulnerability was well known but little reported, and no advance precautions were taken.

A year later, 95% of the rubble remains. Up to 1.5 million Haitians remain homeless. Most promised aid never came. Haitians were left stranded in squalid tent camps on their own. Twelve months later, the crisis festers, a monstrous crime of indifference, neglect, exploitation, and persecution by imperial Washington and world capitalism, valuing Haiti and its people solely as commodities.

"The mountains of rubble still exist. The plight of the victims without any sign of acceptable temporary shelter is worsening the conditions for the spread of cholera, and the threat of new epidemics becomes more frightening with each passing day. In short, there has been no abatement of the trauma and misery which the Haitian populace has suffered."

According to Oxfam's Roland Van Hauwermeiren:

2010 was "year of indecision (that) put Haiti's recovery on hold. Nearly one million people are still living in tents or under tarpaulins and hundreds of thousands of others who are living in the city's ruins still do not know when they will be able to return home." They have none.

Bodies are still being recovered, yet President Preval declared search and rescue operations over 11 days after the quake, and did virtually nothing to find them or provide aid from the time disaster struck. Nor was he visible to show concern.

Washington deployed 22,000 soldiers, Marines, sailors and airmen to obstruct, not deliver, incoming aid, control the airport, other strategic facilities, coastal areas to turn back fleeing Haitians, and secure the country for capital. Desperate Haitians were largely ignored. A year later, they still are.

World support yielded billions of dollars mainly from private donations. According to a Chronicle of Philanthropy survey, an estimated 38% reached Haitians, but the true figure is likely far less, most of it stolen by predatory NGOs or allocated for commercial development. A March 2010 donors conference secured over $5.3 billion pledged by governments. Pathetically little was delivered, least of all from Washington.

The Obama administration promised $1.15 billion. It delivered nothing, its response as contemptuous as shown needy Americans, left mostly on their own during a devastating economic crisis with austerity, not aid, planned going forward.

Compounding unmet needs, Nepalese Blue Helmets introduced cholera in Haiti's main rice-growing area. Now raging, it caused thousands of deaths, hospitalizing many more, and leaving up to a million or more vulnerable to infection. Yet the disease is easily treated if done properly on time. Despite heroic efforts by hundreds of Cuban and other volunteer doctors and medical professionals, including Doctors Without Borders (Medecins Sans Frontieres), cholera remains out of control, the death toll rising daily.

Last October in frustration, a homeless mother lamented that "If it gets any worse, we're not going to survive." It did as cholera rages. Reconstruction is absent. Rubble is uncollected. Aid is absent, and Haiti's November 28 elections were engineered for more of the same, a sham awaiting an unscheduled runoff with two candidates most Haitians reject.

As a result, the combination of devastation, exposure, overwhelming need, disease, neglect, electoral theft, repression, exploitation, and rapists ravaging thousands of woman and young girls left millions of Haitians slowing expiring out of sight and mind to world audiences. It's especially true in America where television news lost interest shortly after the quake and never reported it accurately. Nor have print stories that occasionally continue.

The combination of "rapacious foreign aid workers (and) feckless politicians" lost Haiti, ignoring Washington's iron grip on the country for generations, the root of Haiti's problems. Yet Time stressed that "numerous formerly poor, underperforming countries....achieved a degree of stability and prosperity that would have been unthinkable a few years ago."

False, with few exceptions as throughout the developing world imperial America and predatory capitalism institutionalized exploitation and poverty for the vast majority. Local officials and elites, business leaders, and a small professional class alone profited. South Africa is a case in point where conditions for the Black majority are worse now than under apartheid, an unreported story in the West.

Yet Time insisted that America's "moral obligation isn't to solve the world's most intractable problems. It's to act where we can do the most good." That, of course, required freeing developing countries from its imperial grip, the core issue Time and other Western media ignore.

Despite Haiti's "gloomy backdrop, many Haitians (have) started to find some equilibrium - to heal, to rebuild or simply to readjust their sights....haunting and hopeful." Relating some of their stories, Sontag showed exceptions obscuring the overwhelming misery most Haitians face, ones she and other mainstream journalists ignore, pretending conditions are improving. Daily, in fact, they worsen.

It's "an important time for us to reflect on the important progress that's been made, and the many players who have made it possible, while reaffirming the American commitment to Haiti and looking forward ahead to the work that remains to be done in cooperation with the Haitian people and international partners."

In fact, Washington remains Haiti's main problem, responsible for colonizing, plundering, exploiting, and brutalizing Haitians for generations. Real sovereignty depends on liberation from America's yoke, what most Haitians want most along with removing paramilitary UN Blue Helmets (MINUSTAH), letting Aristide return, and being able to have free and open elections with majority party Fanmi Lavalas participating so Haitians can have leaders they trust.

On January 12, World Bank.org called Haiti's "disaster response/development community (in) reflective mood" despite the continuing human tragedy "compounded by the ongoing political standoff....Still, there are some glimmers of success that provide some motivation for those of us working to transform and modernize Haiti."

The World Bank, IMF and other international lending agencies, of course, exploit nations for capital, leaving most people impoverished and ignored.

NGOs as well are notorious for exploiting nations wherever they show up. Thousands of them now ravage Haiti. Yet the Red Cross said:

"Because of the generosity of our donors, Haitians are receiving immediate relief and longer-term support and training to help them recover and rebuild. And in the coming years, the American Red Cross will continue to responsibly invest the money entrusted to us by the American people into essential programs and projects until every donated dollar is spent."

"This week (an unnamed) leading international charity slammed the relief effort as a 'quagmire,' sharply criticizing the recovery mission (co-)chaired by (Bill Clinton), saying that the much-praised panel 'failed to live up to its mandate.' " In fact, "some problems have worsened." World attention turned elsewhere and predatory NGOs freely plunder Haiti for profit.

Washington plans it on a grander scale, yet on January 12, USAID said:

"From the first moments after the earthquake until today, the US Government has mounted an unprecedented humanitarian effort, led by USAID (in fact, a notorious predator) and through the hard work of many people across multiple agencies and departments. All of this work is supported by the tremendous generosity and compassion of the American people....The US Government is committed to helping the people and Government of Haiti build back better."

"To celebrate (the) lives (of those lost) and honour all our friends and colleagues who perished....the one year anniversary is being marked by a formal commemoration at MINUSTAH." The mission remains committed to "restoring a secure and stable environment." In fact, it's a repressive occupier Haitians despise, reject and want removed.

On January 12 at UN headquarters in New York, Secretary-General Ban Ki-moon participated in a deceitful 4:53PM wreath-laying ceremony, coinciding with the time Haiti was struck. A servant of power, his complicity and indifference worsened Haiti's problems. So have predatory NGOs, Western nations, international lending agencies, USAID, and other exploitive missions.

On January 7, the Washington Post gave rare responsible op-ed space to Professor Alex Dupuy (a Haitian native) for his article headlined, "One year after the earthquake, foreign help is actually hurting Haiti," saying:

The international community, notably "the United States, Canada, France, the United Nations, and financial institutions such as the World Bank and the International Monetary Fund (have been) significantly....problematic. Their objectives and their policies first and foremost aim to benefit their own investors, farmers, manufacturers and non-governmental organizations (NGOs)."

As a result, "a dramatic power imbalance (exists) between the international community, under US leadership, and Haiti. (It) monopolizes economic and political affairs and calls the shots." Haiti's oligarchs "also bear great responsibility for the abysmal conditions of the country before the earthquake," created "in close partnership with foreign governments," notably America and international lending agencies.

This far, IHRC has done little, dispensing less than 10% of the small amount of pledged aid delivered, rebuilding the international airport and clearing major urban arteries. Moreover, of over 1,500 contracts let worth $267 million, Haitian firms got only 20 worth $4.3 million. American companies got the rest, almost exclusively using US suppliers.

More is planned to make Haiti more than ever a colonized sweatshop, its people, the region's poorest and lowest paid, exploited as near-slave labor. As a result, said Dupuy:

"Whatever new government emerges from the recent, though flawed, elections will not change that basic reality."