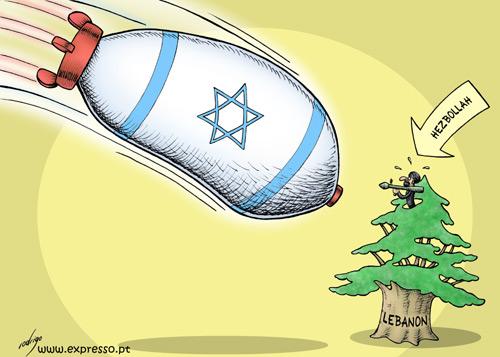 Conditions there remain fluid. Key was a Washington/French pressured UN-backed Special Tribunal's sealed January 17 indictment of those allegedly responsible for former Prime Minister Rafik Hariri's February 14, 2005 killing, preceded by Hezbollah's January 12 pulling out of Lebanon's coalition government causing it to collapse. The above linked articles explain both events in detail, including who, in fact, likely killed Hariri, and implications going forward.

His decision "could give (Hezbollah) and its allies a veto over who becomes the country's next prime minister," Jumblatt saying he wished only to preserve Lebanon's stability, adding:

"I am announcing the right political stand....by assuring the steadfastness of the (PSP) alongside Syria and the resistance (Hezbollah)."

Hariri agreed to accept the result of January 24 discussions with President Michel Suleiman who called for consultations to choose a new prime minister based on who's most strongly backed. Hezbollah is expected to nominate former prime minister Omar Karameh. Under Lebanon's confessional system, prime ministers must be Sunni Muslim, presidents Maronite Christian, and parliamentary speakers Shia Muslim.

Besides backing Hezbollah (and Syria), he "slammed the UN-backed Special Tribunal (STL) as a tool for 'political blackmail" that threatens the country's national unity and security." Its Hariri killing investigation caused tension between the two blocs, now heightened after announcing release of its sealed indictment expected to name Hezbollah. However, it will be late February or early March before it's known for sure.

Saying Lebanon stood at "a dangerous crossroads," Jumblatt's decision gives March 8 bloc parties an edge, though how many of his 11 members will vote with him isn't sure. According to an unnamed alliance member, he promised at least seven, saying:

"The opposition has secured a majority in Parliament. But holding the parliamentary consultations on time remains uncertain," explaining that Arab and international attempts for compromise could delay scheduled discussions. When held, Suleiman will choose the most popular new prime minister based on choices of all parliamentary members. Both sides are now scrambling to prevail.

"The international tribunal has assumed a political dimension par excellence, threatening the national unity and national security. This tribunal's path has become a tool of sabotage and deviated from the path of justice to enter a political bazaar and political blackmail."

He added that a Saudi-Syrian attempted compromise proposed ending Lebanon's links to the STL by canceling further cooperation, halting funding, and withdrawing Lebanese judges. He initially supported the effort "because it provided a solution for the current crisis," and was endorsed by all parties until (Washington/French) pressure corrupted it, adding:

"International powers did not agree or accept a Syrian-Saudi rapprochement through which an inter-Lebanese settlement could be reached to negate the ramifications of the tribunal and its indictment which is in theory secret, but has been announced by all the media outlets. This matter has undermined the tribunal's credibility and confirmed that it is politicized."

Jumblatt's decision came a day after Turkey and Qatar abandoned efforts for a solution, warning partition or possible conflict could result.

Which side will prevail isn't clear or whether sectarian strife will result either way. In Lebanon, resolution isn't simple. Hezbollah wants no street violence, but won't accept a Hariri-led government. Washington, Israel and France won't tolerate a Hezbollah-led one. Battle lines are clearly drawn. Some fear political stalemate followed by Mossad assassinations, car bombings and other violence wrongfully blamed on Hezbollah as was Rafiq Hariri's killing.

Going forward, resolution depends on dissociating Lebanon's government from the corrupted tribunal and political compromise, but don't expect it under a Hezbollah-led government. Most often in Lebanon, what's next remains unknown.

Hopefully, the Lebanese people will be able to get thru this without any more bloodshed.  Nazrallah is a very charismatic, intelligent and well-liked leader.  Maybe, he can lead his people down the right path to peace.   Either way, Israel is squirming in its britches.  Time and again, they end up at the end of a self-fulfilling prophecy and approaching the end of their rope with every evil deed and every crime against humanity.

Why Are There Crickets in the Media When History Has Been Made in Arkansas?

Terpsehore "ToreSays" Maras Joins to Discuss the Battle for Ohio Secretary of State: