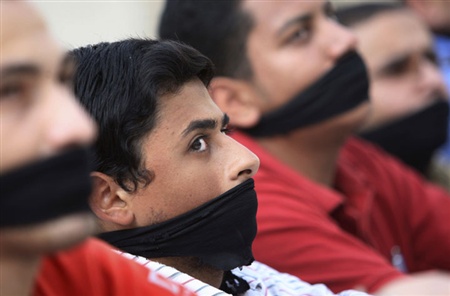 Facing possible instability, (m)ost analysts believe that the current Egyptian regime will muddle through its myriad challenges and endure indefinitely (with) enough coercive power to ensure" it.

It's also "entering a period of political transition. President Hosni Mubarak is (81) and reportedly" ill. His (46 year old) son Gamal "is evidently being groomed to succeed him." However, the "process could prove difficult."

"Thus, while Egypt on the surface appears stable, the potential for growing political volatility and abrupt discontinuities (ahead) should not be summarily dismissed."

-- "an Islamist push for political power."

One indicator to watch for, he suggested, would be "the number of protestors in the streets....in response to a leadership transition," not public anger against high unemployment, extreme poverty, and Mubarack's dictatorship, inspired by mass protests ousting long-time Tunisian despot Zine El Abidine Ben Ali, what some observers thought impossible until it happened and began spreading across the region. More on that below.

Note: Egypt is the largest, most significant Arab state, vital to US regional interests. After Israel, it receives more aid than any other nation, nearly $2 billion annually. Around two-thirds is for military use, including repressing dissent. The rest is economic for neoliberal reforms, including privatizing state resources.

Washington worries that Egypt's uprising may grow if not stopped. It won't tolerate revolutionary change that potentially could spread globally, including on US streets where millions face depravation levels unseen since the Great Depression.

"As we monitor the situation in Egypt, we urge all parties to refrain from using violence, and expect the Egyptian authorities to respond to any protests peacefully. We support the universal rights of the Egyptian people, including the rights to freedom of expression, association and assembly."

"We are monitoring the situation in Egypt closely. The United States supports the fundamental right of expression and assembly of all people. All parties should exercise restraint, and we call on the Egyptian authorities to handle these protests peacefully."

"Our assessment is that the Egyptian government is stable and is looking for ways to respond to the legitimate needs and interests of the Egyptian people."

Don't be fooled. Her message is harsh and clear. Washington tolerates no dissent and will help Egypt crush it brutally. In fact, working with local police, Washington does it domestically against global justice and other protests, including during 2000 and 2004 presidential political party conventions brutally.

"Tens of thousands of people demanding an end to (his) 30-year rule....filled (Cairo, Alexandria, Suez, and other Egyptian streets), in an unusually large and sometimes violent burst of civil unrest that appeared to threaten the stability of one of" America's closest regional allies.

"The big, grand ideological narratives were not seen today. This was not about 'Islam is the solution' or anything else." It's about people fed up with a repressive, corrupt dictatorship, wanting democracy, jobs and poverty relief. It's about Mubarak denying them for decades.

Protest organizers coordinated online for a "Day of Revolution against torture, poverty, corruption and unemployment," on a day honoring police used by dissidents to protest their brutality.

According to American University of Cairo Professor Mustapha Makel al-Sayyid:

"I think it is the beginning of (broader social unrest). Some of the demonstrators are still in (Cairo's) Tahrir (Square) and said they will not leave until their demands are met by the government." After police forced them out, al-Sayyid added, "Their demands will not be met....but they will not give up."

"(T)he Egyptian people are calling for the downfall of President Mubarak, and the Lebanese are appointing a (Hezbollah-allied) prime minister....Rarely has the Arab world seen anything like this....(A)cross the Middle East, we are waiting to see the downfall of America's friends. In Egypt, Mr. Mubarak must be wondering where he flies to. In Lebanon, America's friends are collapsing....We do not know what comes next." Neither does Washington and regional despots, perhaps arranging their own safe havens.

Some "hurl(ed) rocks and climb)ed) atop an armored police truck" chanting anti-Mubarak slogans. Police responded with water cannons, tear gas, and attacking crowds with batons. Several deaths were reported and dozens of arrests. Al Jazeera's Rawya Rageh called the protests "unprecedented," especially after authorities warned about not emulating Tunisia, and Egypt bans all demonstrations without permits rarely given - never for large numbers.

"We want a functioning government. We want Mubarak to step down. We don't want emergency law. We don't want to live under this kind of oppression anymore. Enough is enough. Things have to change and if Tunisia can do it, why can't we?"

"People are fed up with Mubarak and his dictatorship and his torture chambers and his failed economic policies. If Mubarak is not overthrown tomorrow then it will be the day after. If it's not the day after it's going to be next week."

"It is incumbent on everyone to realize that there is a new law against terrorism, which replaces the emergency law applied until now, but what should be emphasized is that people who want to go out to the streets to voice their demands" may do it.

Al Ahram also said 90 were arrested in Cairo, more elsewhere, and many others targeted for investigations perhaps leading to imprisonment, torture and death. An independent lawyer coalition reported six deaths and said at least 1,200 were detained. For sure many more will be as protests continue.

"Repercussions of the Tunisia example will be deep and significant and will be felt throughout the region. The uprising signifies not only the failure of the neoliberal model that Arab regimes pursued, but also the futility of political oppression to enforce this model in the long run. The event signifies the beginning of a new era that must be seen as a process of change and might lead to the creation of a new region."

Possibilities are, in fact, breathtaking and broad, embracing political, economic, and social demands "signifying the dead-end of a system that employed excessive political oppression to enforce destructive neoliberal economic policies. Privatizing the public sector essentially reversed the post independence economic achievements of these countries," creating inequality and intolerable conditions for most people. Now they're reacting, inspired by early Tunisia successes that continue demanding ouster of all former government officials.

Most interim cabinet members, including acting Prime Minister Mohamed Ghannouchi, are regime holdovers. For days, police showed restraint. On January 24, they changed tactics with tear gas, razor wire barriers, and other measures against protestors refusing to disperse, defying curfew orders by camping out peacefully all night, demanding a new government.

Twenty-two year-old Othmene spoke for others, saying; "We will stay here until the government resigns and runs away like Ben Ali." Teachers and civil servants went on strike joining them, assuring protests continue.

Potentially the entire region is affected. Other protests erupted in Algeria, Yemen and Jordan, at times met with deadly force. On January 22, AP said over a dozen people were killed in Algiers, Algeria's capital. Protesters said dozens more were injured. Said Sadi, head of the Rally for Culture and Democracy (RCD), said the group's leader, Othmane Amazouz, was arrested.

On January 21, RCD, the Algerian League for the Defense of Human Rights (LADDH), the Socialist Forces Front (FFS), and four trade unions formed a national democracy movement for change.

In a region with endemic poverty, Yemen is the Arab world's poorest country with extreme depravation and youth unemployment levels, an explosive mix fueling unrest. On January 22, around 2,500 demonstrated at the University of Sanaa. Others occurred in Aden, Lahj and elsewhere. Police and military forces responded repressively with tear gas, live fire and mortars, arresting dozens and causing at least one death.

On January 21, thousands protested in Amman and other Jordanian cities demanding "bread and freedom," as well as ouster of government officials, chanting: "(Prime Minister Samir) Rafia, out, out! People of Jordan will not bow!"

Throughout the region, common interests drive protests, including state repression, mass unemployment and poverty, rising food and fuel prices, malnutrition, and for some starvation, a neoliberal caused catastrophe erupting regionally for change.

Today, in the Middle East. Tomorrow perhaps globally given growing levels of human depravation everywhere, including in developed countries like America.