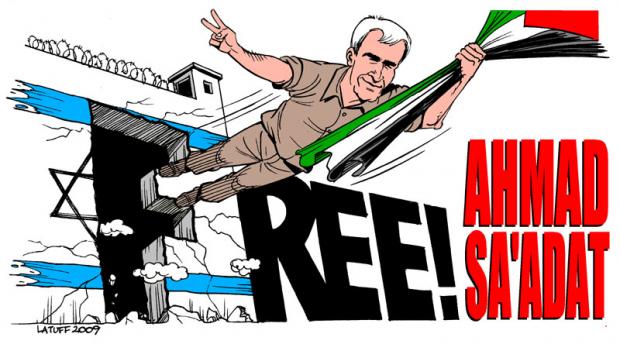 A previous article discussed his background, activism and status in detail, accessed through the following link:

Extensive information on him can be found on:

As General Secretary of the Popular Front for the Liberation of Palestine (PFLP), he was sentenced in 2002 to 30 years in prison "for a range of 'security related' political offenses," including his prominence in a prohibited organization.

For over 40 years, Israel targeted him relentlessly, subjecting him to numerous arrests, torture, false imprisonments, and isolation for opposing occupation and wanting Palestine liberated.

On December 28, 2008, he was sentenced to 30 years in prison, Israel's harshest political punishment, though illegal under international law. Refusing to recognize the court's legitimacy, he calls himself "a prisoner for freedom."

For nearly 700 days (since March 19, 2009), he's been held in isolation with no family visits, reading material, or contact with counsel, friends or fellow prisoners. On October 24, 2010, his status was extended another six months until April 21, 2011 "barred from human contact."
The campaign to free him asks people of conscience everywhere to speak out, demanding he and other political prisoners be released.

Even in isolation, he's not silenced. In a statement issued on January 15, he supported Tunisia's liberating struggle against "a system of injustice, abuse and exploitation," urging democratic forces unite to press for legitimate demands.

A January 15 statement on the 9th anniversary of his PA kidnapping headlined, "We Will Not Forget and Will Not Forgive," saying:

"Today, the campaign in solidarity with Ahmad Sa'adat (demands) accountability and punishment (for) perpetrators of this crime...." Moreover, it rejects PA "cooperation with the enemy....under the pretext of 'protecting the supreme interests of the Palestinian people (and) upholding our commitment to signed agreements.' "

"Meanwhile, every day, our people suffer from occupation, poverty and siege. It is the duty of leaders and true (patriots) to protect the Palestinian people and their land, resist the settlers, and champion the people and their resistance, as Ahmad Sa'adat" did so heroically and continues doing under harsh isolation conditions.

On January 19, around 25 Dublin (socialist republican) "eirigi" protesters held a candlelight vigil in front of the Israeli embassy, highlighting the treatment and ongoing hunger strike of Sa'adat and Hamas leader Jamal Abu Al-Haija. In solidarity with both men, they pledged to keep focusing on their status, saying:

"We in Ireland understand only too well the seriousness of the situation when you have no option left but to use your body as a weapon" for justice. They added that Palestinian supporters worldwide "will hold the Zionist regime directly responsible for the well being" of both men and all other Palestinian political prisoners.

On January 21, the Campaign in Solidarity with Sa'adat, in collaboration with French allies, "condemned French Foreign Minister Ms. Michelle Alliot-Marie (during her Gaza visit), and demanded" she apologize for calling Israeli soldier Gilad Shalit's detention a "war crime," while ignoring the thousands of illegally held Palestinian prisoners, including young children.

Sa'adat in His Own Words

Refusing to be silenced, one of many Sa'adat quotes affirmed that:

"I too possess a will obtained from the justice of our cause and the determination of our people to reject any decision from (Israel's) 'kangaroo court,' and to preserve a logical and cohesive balance, and to continue my determination to resist your occupation alongside the sons and daughters of our people, in spite of the limited space that you impose on my already-limited movement as a 'prisoner for freedom.' "

The Friends of Ahmad Sa'adat, a "new international network for coordination of support and solidarity activities" urges activists everywhere united for Palestine's liberation "to come together, network, and coordinate in order to educate and mobilize people around the world to work for him and all illegally held Palestinian political prisoners." More information is available through the following link:

In solidarity, get involved for justice denied him and many others out of sight and mind to most people.

US Courts Over International and Constitutional Law