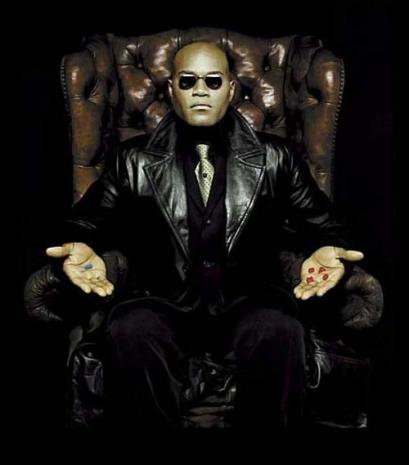 It has been years since I last watched The Matrix, a lapse I corrected last night. As the movie makers intended, the film serves as stark metaphor of the world as we know it.

Or, more appropriately, as we think we know it. If asked, the average citizen of these United States would describe their life in entirely ordinary terms. They work at such-and-such a company, they live in this or that place, they enjoy one activity or another, and so on.

All in all, a life of self-directed activity, designed to sustain themselves and their families in a satisfactory way.

But I suspect if we could actually take a “red pill” of the sort offered by Morpheus in The Matrix, and by so doing awaken to the truth of our situation, a different reality might be revealed.

This thought was reinforced by emails received from attentive readers about remarks I made in my article The Road to Detroit. I urged people to get serious about international diversification, making the following remarks about Canada:

For a U.S. citizen, if you did nothing more than opened up a
Canadian bank and brokerage account, you’d be well ahead of the
game. While Canada has its own share of problems, the banking
system there is in far better shape than here, and as a “foreigner”
you are far less susceptible to government intrusions into your
affairs. Oh, and for the record, the Toronto Stock Exchange has
outperformed the S&P 500 in eight of the past nine years in nominal
terms, and by a considerable margin when you also consider how
much stronger the Canadian currency has been compared to the
U.S. dollar in recent years.

As some readers pointed out, thanks to energetic efforts by the U.S. government, it is difficult for an American to open up foreign bank and brokerage accounts, in Canada as well as pretty much everywhere else.

That said, based on my personal experience and that of many Americans I know, you can open a Canadian bank account – maybe not with all Canadian banks, but at least two of the majors that I’m aware of.

More specifically, after you have identified a Canadian bank that will open accounts for U.S. citizens – a phone call should suffice – you will have to present yourself in person, along with all the appropriate documentation. The banker will then ask you some questions to better get to know you and your purposes for opening a Canadian account. In my case, the answers were simply that I make investments in Canada and prefer to do my transactions in Canadian dollars held in a local institution, rather than go through the time, hassle, and costs of currency exchange and cross-border money transfers.

If, on the other hand, a person were to show up unshaven and muttering about the damn U.S. government, asking if the Canadian bank reported account information to the U.S. government, I can assure you an account would not be opened.

As for the brokerage account, that is far more difficult – and in fact, my Canadian accounts are technically domiciled in the U.S., because of an agreement forced on the Canadians by the U.S. financial authorities. That said, if you are willing to jump over a couple of fairly high hurdles – preferably with the help of competent counsel – there are ways to legally get around the restrictions using, for example, a foreign trust or a foreign LLC. But as there is a fair amount of costs and complexity involved, such measures are typically only for individuals looking to diversify significant assets.

But if you have significant assets, then it is becoming increasingly important to get educated on diversification. Because, as mentioned, it’s not just Canada, but pretty much every country in the world that kowtows to the U.S. government at this point.

Case in point: as an experiment a couple of years ago I tried to open a personal account in Uruguay and, despite being accompanied on my prearranged appointments by a well-known Uruguayan, a man of considerable influence at the highest echelon of Uruguayan society, none of the native banks would open an account for me. The only one that would was an Israeli bank with large headquarters in NYC. I passed.

Back to my theme... namely, once the scales drop from your eyes, an unpleasant reality materializes. In the case of the human inhabitants of The Matrix, it was that they were drugged and raised in pods to serve as a renewable energy source for the machines that had taken over.

In the United States and elsewhere, the reality is that while we are not raised in pods – but rather allowed to live our lives as free-range humanoids – the net result is much the same. In the eyes of officialdom, our best and highest purpose as individuals is to provide the fuel that keeps the bloated state operating.

I know that sounds extreme, but then please explain to me why my own government should have even the slightest influence on whether or not I open overseas financial accounts, let alone actively take steps to pressure international financial institutions not to accept my account.

It is time to wake up… to take the red pill, so to speak. Don’t do anything illegal, and never try to avoid your taxes – The Matrix is almost all-seeing at this point – but if you have significant assets to protect, you need to begin a course of serious study as to your options. Buying property overseas is one approach you can take; another is to research securing another passport and look into off-shore trusts and LLCs. In all cases, keep caveat emptor in mind.

Or take the blue pill and settle back into your routine, knowing that the odds are good you’ll end up broke and discarded once Big Brother’s machine is done with you.

[As David said, it is critical for any investor – and especially those with sizeable assets – to internationalize their wealth. Don’t wait until it’s too late… the doors on legal asset transfer outside of the U.S. could literally close any moment. Learn why you need to act NOW, and all about the 5 best ways to diversify – click here