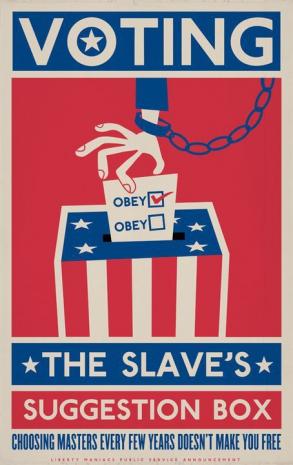 With world attention focused on Middle East events, mainly Egypt's, Haiti's gotten little attention despite its compelling need for real change. So far, it's nowhere in sight, nor openly discussed, or demanded like visible millions are doing abroad.

Stay tuned. It may happen if visceral anger spreads globally by enough people knowing that democratic freedoms depend on them - through massive, sustained grassroots pressure, accepting nothing less than ouster of corrupt, repressive regimes for equitable, just ones they choose.

Despite sham November presidential and parliamentary elections and growing calls for new ones, a runoff March 20 second round is scheduled, led by two Washington-approved presidential candidates:

If plans remain unchanged, a new president will be named on April 16. On February 7, Preval's term expired, but parliament-passed legislation let him stay in office until mid-May.

Commenting in a February 3 press release, Mark Weisbrot, co-director of the Center for Economic and Policy Research (CEPR), said:

"Now two right-wing candidates, who received from 6.4 and 4.5 percent of registered voters, respectively, will compete for the presidency, in another farcical 'election.' This is a big setback for democracy in Haiti. Far from fixing the problems with the first elections, this is simply an attempt to impose an illegitimate government on Haiti, and it will backfire."

On January 30, that possibility perhaps brought Secretary of State Clinton to Haiti, like a modern-day empress making demands - telling Preval it's:

"important that the election go forward so there can be a new president. There is so much work to be done, and the international community stands ready to help (read exploit at the expense of Haitians set up again for betrayal)."

In six whirlwind hours before heading home, she met with Preval and the three leading candidates, forcing out Jude Celestin, "literally under the threat of starvation," according to Weisbrot. Moreover, she did it despite pressing Middle East events, Egyptians and others regionally demanding democratic freedom and justice.

Tahrir Squares proliferate globally, including in Haiti and across America where hopefully mass liberating fervor may also emerge, spread and persist as courageously as in Egypt.

In recent weeks, Washington and Western allies pressured Preval to accept OAS's recommendation to dump Celestin, despite CEPR's analysis showing its analysis was "deeply flawed....and the Center noted that six out of seven of (its) 'experts' were from the US, France, and Canada," the cabal that ousted Aristide. They now run Haiti like a plantation, denying it fair elections, freedom, and sovereignty.

Exiled for nearly seven years after US marines abducted him at gunpoint in February 2004, he wrote an open letter saying:

It's also vital for medical reasons, Aristide saying he's had six eye surgeries, experiences "unbearable pain" in winter, and must avoid another one "to reduce any risk of further complications and blindness." A previous article explained, accessed through the following link:

He understands that "the Council of Ministers has agreed to issue a diplomatic passport to President Aristide befitting his position as a former President of the Republic."

He thus requested it "immediately and that plans for his return commence" at once. He also asked Haitian authorities to arrange with their South African counterparts for his "immediate return."

Moreover, he asked that proper security be provided, according to Haitian law.

On January 19, New York Times writer Ginger Thompson headlined, "Aristide Says He Is Ready to Return to Haiti, Too," saying:

Days after Baby Doc Duvalier's arrival, Aristide requested permission for himself. "It was not the first time that Mr. Aristide had talked publicly of his desire to return to Haiti, but (this) statement....threatened to fuel tensions already stirred" by Duvalier's presence.

That The New York Times commented is noteworthy, no matter its longstanding animosity toward Haiti's only democratically elected president who served faithfully, righteously, honorably, and selflessly. He was all-giving, asking nothing in return. Why else would Haitians revere him, rallying for him openly to show support.

Whatever its reason, the Guardian printed what US publications suppress, Aristide's article headlined, "On my return to Haiti," saying:

"A profit-driven recovery plan, devised and carried out by outsiders, can not reconstruct my country."

Indeed not. It can only exploit poor Haitians, ravaging them for profit, pillaging their resources like a previous article explained, saying Haiti is no stranger to adversity and anguish. It experienced over 500 years of severe oppression, violence, slavery, despotism, colonization, reparations, embargoes, sanctions, occupation, deep poverty, starvation, unrepayable debt, and natural calamities like hurricanes, epidemics and earthquakes, followed by little or no outside aid.

Reflecting on Haiti's January 2010 earthquake, he said the primary school he attended "collapsed with more than 200 students inside." Devastation hit throughout the struck area - "65 seconds that irrevocably changed Haiti." Its full impact won't ever be known.

What is known is:

"(t)he exceptional resilience demonstrated by the Haitian people during and after the deadly earthquake reflects the intelligence and determination of parents, especially mothers, to keep their children alive and to give them a better future, and the eagerness of youths to learn - all this despite economic challenges, social barriers, political crisis, and psychological trauma. Even though their basic needs have increased exponentially, their readiness to learn is manifest. This thirst for education is the foundation for a successful learning process: what is freely learned is best learned."

For Lavalas under his leadership, education was "a top priority." During his tenure, "more schools were built (than) between 1804 to 1994: one hundred and ninety-five new primary schols and 104 new public high schools constructed and/or refurbished."

A year later, "young people and students (try) to fill the gaping national hole left since" 1/12/10. Public thirst for education can't be extinguished. Instead of rebuilding what was lost, "an exogenous plan of reconstruction (is planned) - one that is profit-driven, exclusionary, conceived of and implemented by non-Haitians - cannot reconstruct Haiti."

Haitians must have direct involvement doing it. Since February 29, 2004, the day Aristide was exiled, he's vowed to "return to Haiti to the field I know best and love: education." Citing Nelson Mandela, he agreed that "education is a powerful weapon for changing the world."

He wants to help Haitians change theirs. They both deserve it, unimpededed by imperial exploitation and plunder, taking all, giving nothing back in return - a Washington specialty globally.

Perpetual War on Russia and the Bout - Griner Exchange