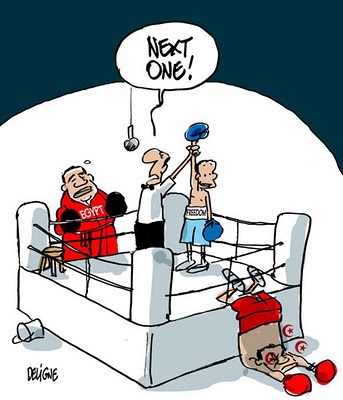 As news spread, jubilant crowds responded. "Across the Middle East and north Africa, loudspeakers on mosques called on citizens to rejoice in their own cities....In Lebanon, where the Cairo protests (were) reminiscent of mass anti-Syrian" 2005 demonstrations, "convoys bearing Egyptian flags blared their horns as fireworks went off across the country." Thousands came out to celebrate, a scene repeated in many Arab countries.

Hezbollah and Hamas observed Egypt's "historic victory." Crowds turned out in Beirut, across Lebanon, and "en masse (throughout) Gaza....joyfully shooting in the air and honking their car horns." Hamas' armed wing, the Ezzedine Al-Qassam Brigades, also rallied in support.

"What happened in Egypt is not only for the Egyptian people, it is for all Arabs. The whole Arab world is going to change."

Tunisia had a carnival-like atmosphere, crowds out in streets dancing and chanting joyously. A student named Nourredine said:

"It's wonderful! Two dictators have fallen in less than a month." Many more are left, however, and major hurdles remain against very long odds. Yet activism at times prevails when enough sustained pressure accepts nothing less than real change. Letting up, however, assures defeat against powerful dark forces giving nothing unless forced.

Tunis activists called on Algerians to topple their president, Abdelaziz Bouteflika, chanting, "One, two, three, viva L'Algerie," unmindful that the country's military has supreme power, and isn't shy about using it brutally.

"Long live Egypt, goodbye Mubarak. The people have toppled the regime. Who is next?" They want their own regime change and still protest for it.

Even Saudis Are Worried

Perhaps fearing its own uprising, the Kingdom's government (unchanged since its 1932 founding) "react(ed) to the winds of change blowing throughout the Arab Middle East. For the first time, a political party has been established - and though it has not yet received official government approval," it asked King Abdullah to allow it.

Saudi's Kingdom "revolves politically around the royal Al-Saud family in many ways," headed by:

-- Deputy Prime Minister Sultan bin Abd al-Aziz Al-Saud is Crown Prince, next in the line of succession; and

Supported by lawyers, businessmen, and others, Saudi's new Islamic Nation Party is a first. Saying it will work for political reform and human rights, it stressed that the "regime need not fear the democratic spirit overtaking the Arab world."

Up to now and unless changed, King Abdullah appoints a Cabinet of Ministers every four years, including many royal family members. No elections are held. In 2006, a committee of Saudi princes was established to serve unspecified future selection functions after Crown Prince Sultan becomes king. A 150-member Consultative Council also exists, headed by a royal appointed chairman to serve four years.

In 2003, the Council of Ministers said future Consultative Council elections would be held. None have been so far although some municipal ones were held in 2005. The Center for Democracy and Human Rights in Saudi Arabia supports democratic governance, so far absent in the Kingdom under royal family rule. Who knows if change will come. Since mid-January, anything is possible even against long odds, including in Occupied Palestine.

"I am so happy. This is a day that we have awaited for so long as (Mubarak's) regime weakened the standing of the Arab nation and its own people in the face of the Israeli occupation. I would like to congratulate our Egyptian brothers and sisters on this remarkable and historic day as their will has emerged victorious. I pray that such a victory of the people will be repeated across the Arab and Islamic worlds and that all regimes like (Mubarak's) will step down."

Israeli Arabs celebrated with "fireworks, gunshots fired in the air, sweets and shows of solidarity....Arab towns and villages across the country (rallied) in a spontaneous grassroots response."

In Nazareth, hundreds of Balad party members gathered in support of Egyptian and Tunisian uprisings, saying rallies were planned last week. After Mubarak stepped down, they celebrated joyously, believing events throughout the region strengthen their own self-determination dreams.

"The Egyptian people made its statement, and this is a call to all Arab nations to arise, in the name of democracy and freedom."

"Let us hope that these values will conquer regimes in our region which (now) oppress their citizens," implying but not mentioning Israel.

A Gaza City rally heard speakers say: "The people want to bring Abbas down." Although Hamas restricted anti-Mubarak protests, it joined others celebrating his ouster. It also asked Egyptian authorities to open Rafah's crossing permanently as a first step to breaking Israel's siege. So far it remains closed except for intermittent openings.

On February 12, Reuters headlined, "Egyptians all over the world celebrate Mubarak's ouster," saying:

"From New York hookah lounges to London streets, (they) joined their countrymen in celebrating the fall of" Egypt's hated despot. Around 200 gathered outside Egypt's London embassy beating drums, dancing, hugging, and chanting, "Bye bye Mubarak" before marching through streets.

In Berlin, about 300 expats rallied at the Brandenburg Gate, where East and West Berliners celebrated breaching the Berlin Wall 21 years earlier in November 1989.

Nonetheless, some expats expressed caution, in London, Sayed Galal speaking for others said:

"We're happy but also scared. We're hoping that finally we'll get someone who serves the people before himself. This is the most dangerous time for Egypt."

Imad Abu Othham agreed saying, "Saddam went, and what did we get?"

"I was extremely disappointed in the way Obama and Clinton handled the situation. America is a democracy. It should have stayed by the people (from) day one. For me, it tainted the reputation of America."

New York "On the Nile" cafe owner, Hamdi Hamza agreed, saying, "The Egyptian people love the American people but why did America stand by Israel and forget the Arabic people."

Over the weekend, Egyptians and others globally celebrated. Today they awakened to the cold reality of a new dawn. On February 14, Reuters headlined, "Army orders last protesters out of Egypt's Tahrir," saying:

Those remaining "were cordoned by military police and soldiers on Monday, and they said they had been told by the army to leave the square or face arrest....Witnesses said military police in red berets had surrounded the protesters, supported by scores of soldiers."

Its leadership "rejected the demands of pro-democracy protesters for a swift transfer of power to a civilian administration, saying it intends to rule by martial law until elections are held."

A forthcoming article discusses more. For now, understand that martial law is extremely dangerous, an authoritarian last resort measure. It means government by military rule, suspension of civil liberty rights, and force instead of rule of law protections accompanied by unrestrained harshness against dissent. If maintained, promises so far made may again go unfulfilled, what many pro-democracy supporters fear.