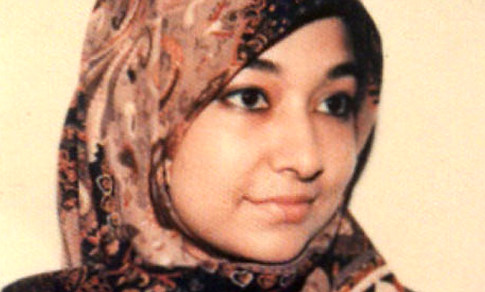 In March 2003, after visiting her family in Karachi, Pakistan, government Inter-Services Intelligence (ISI) agents, in collaboration with Washington, abducted her and her three children en route to the airport for a flight to Rawalpindi. Handed to US authorities, she was secretly incarcerated at one or more prisons, including Afghanistan's Bagram for more than five years of brutal torture and unspeakable abuse.

Bogusly charged and convicted, she was guilty only of being Muslim in America at the wrong time. A Pakistani national, she was deeply religious, very small, thoughtful, studious, quiet, polite, shy, soft-spoken, barely noticeable in a gathering, not extremist or fundamentalist, and, of course, no terrorist.

She attended MIT and Brandeis University where she earned a doctorate in neurocognitive science. She did volunteer charity work, taught Muslim children on Sundays, distributed Korans to area prison inmates, dedicated herself to helping oppressed Muslims worldwide, yet lived a quiet, unassuming nonviolent life.

Nonetheless, she was accused of being a "high security risk" for alleged Al-Qaeda connections linked to planned terrorist attacks against New York landmarks, including the Statue of Liberty, Brooklyn Bridge and Empire State Building, accusations so preposterous they never appeared in her indictment.

The DOJ's more likely interest was her connection through marriage to a nephew of Khalid Sheikh Mohammed (KSM), the bogusly charged 9/11 mastermind who confessed after years of horrific torture. US authorities tried using them both - to coerce KSM to link Siddiqui to Al Qaeda, and she to acknowledge his responsibility for 9/11 - something she knew nothing about or anything about her distant relative.

Her trial was a travesty of justice based on the preposterous charge that in the presence of two FBI agents, two Army interpreters, and three US Army officers, she (110 pounds and frail) assaulted three of them, seized one of their rifles, opened fire at close range, hit no one, yet she was severely wounded.

No incriminating forensic evidence exists. Nothing credible was presented at trial. Some materials were kept secret. The proceedings were carefully orchestrated. Witnesses were either enlisted, pressured, coerced, and/or bought off to cooperate, then jurors intimidated to convict. Her attorney, Elaine Whitfield Sharp, said their verdict was "based on fear, not fact."

On September 23 in federal court, US District Court Judge Richard Berman sentenced her to 86 years in prison - a gross miscarriage of justice, compounding her abduction, imprisonment, torture, prosecution, and conviction on bogus charges.

The day Siddiqui and her children disappeared, "an unidentified man visited the family home in Karachi," threatening her mother to say nothing if she wanted to see them again alive. Within months of her abduction, Pakistani authorities also cooperated with Washington in seizing dozens of other foreign nationals, wanted by US authorities.

Post-9/11 through 2005, human rights groups estimated that from 400 - 800 people were transferred from Pakistani to US custody. Multiple Pakistani government sources told Siddiqui's mother, Ismat, that her daughter was in US custody. After the news surfaced, US officials began backtracking on earlier statements. According to AP:

"Two federal law enforcement officials, speaking on condition of anonymity, initially said (Siddiqui) was taken into custody by Pakistani authorities." Later, however, they "amended their earlier statements, saying new information from the Pakistani government made it 'doubtful' she was in custody."

An agency spokesperson formerly denied knowledge of her whereabouts, but on April 23, 2003, Pakistan's Daily Ummat said Pakistani authorities arrested her. Other credible evidence pointed to her Bagram imprisonment as well as US/Pakistani collusion.

Pakistani journalist Najeeb Ahmed spent years investigating her case. On December 9, 2009, he told a public rally that government forces arrested, abducted, and handed her over to FBI agents. Interrogated initially in Pakistan, she was then transferred to Afghanistan and imprisoned. The day after speaking publicly, Ahmed mysteriously died, reportedly of sudden heart failure. His research files disappeared, were never recovered, leaving some observers to believe clear Washington/Pakistani involvement.

On July 30, 2008, his Daily Jang Karachi article discussed an anonymous eye witness saying he participated in Siddiqui's arrest, carried out jointly with FBI and Pakistani authorities.

In April 2010, a Pakistani-American (unidentified for his safety) contacted IJN, saying he had information about Siddiqui's 2003 disappearance. IJN interviewed him multiple times by phone and in person. Below is what he provided.

In spring 2010, he met Imran Shaukut, Sindh Province Superintendent of Police who discussed his personal involvement in Siddiqui's arrest and fabrication about her and others. He was so stunned by the news that he followed up with another meeting, bringing a digital audio recorder to tape their four-hour visit. Afterward, he contacted IJN and supplied a copy. Along with other related documents, it's available on:

"She wore gloves and a veil....When she was caught she was traveling to Islamabad....we gave her to ISI. (She) was a minor facilitator," perhaps, but not confirmed, linked to Al Qaeda.

He said her daughter, Mariam, was "already home," what wasn't known until he confirmed it. IJN's investigation also learned that "for some months prior to being found by neighbors wandering around in the street near her grandmother's home in Karachi, (she was) kept in a nearby location for several months by several English-speaking individuals."

On July 30, 2008, the FBI told Siddiqui's brother that she was in Afghanistan and injured. Shortly afterward, she was brought to America to stand trial in federal court. Though warned by the judge to say nothing unrelated to her charges, her testimony confirmed she'd been "tortured in a secret prison" where she was "forced to engage in incriminating behavior (such as copying over suspicious-looking documents) under constant threats of harm to her children."

She also said she never reached for, held, or fired a gun at anyone. Forensic evidence supports her. The changes were entirely bogus. A subsequent Department of Defense WikiLeaks release corroborated her account.

"Despite the overwhelming weight of the physical evidence that demonstrated that (she) never touched or fired a weapon, she was convicted of all of the charges brought against her, and was sentenced to 86 years in prison." On March 28, 2011, the first briefs in her appeal will be filed.

IJN believes "overwhelming evidence" confirms that Pakistan conspired with Washington in Siddiqui's abduction and disappearance with her three children from March 2003.

"Based on (its) preliminary investigation....it is reasonable to conclude that Dr. Siddiqui was held for some period of time by Pakistani military intelligence (in Karachi), and was also interrogated by" ISI and FBI agents.

As a result, Pakistan's government "should take firm and immediate action to bring this grave injustice to an end, and demand that (Washington) repatriate (her) to Pakistan. Significantly," the Obama administration requested repatriation of one of its own citizens, an embassy official arrested for two killings he admitted committing.

US news reports said Pakistan's law minister, Senator Babar Awan, mentioned possibly exchanging him for Siddiqui, saying Washington had "a repatriation call and we have a call," according to London's Daily Telegraph.

Thousands of Pakistanis have rallied in her support throughout the country. Sending her home serves the interests of both countries and moves Siddiqui a step closer to long overdue justice, even though her ordeal in US custody can never be adequately redressed, nor can her shattered physical and mental state be made whole after years of horrific torture, abuse, imprisonment and isolation.

After arrest, she was "taken to some off-site country - a third world nation, possibly Jordan or Afghanistan - where she was detained for five years in a black site or secret prison. Here she was forced to create documents to incriminate herself to support what we see in this war on terror. She was then dumped in Afghanistan with a bag that conveniently had incriminating documents."

She's "no more a terrorist than Nelson Mandela" or hundreds of others Washington bogusly charged, imprisoned and abused. "She was not a person who was a serious player in Al Qaeda. She may have had contact in those associations, but it was innocent. She was not the person that I would believe to be involved in anything remotely designed to cause harm to another human being, but rather quite the opposite."

In March 2003, after being dragged from a cab, then knocked out by drugs, she awakened strapped to a gurney. Pakistan's Udru speaking press said "she was seen and picked up on a CIA transport plane." While in custody she said "she was drugged, electrocuted, tortured, and threatened with her kids being harmed. They threaten to rape her daughter, told her that (her son) was dead, and said that they would shoot her baby son and asked if would she would like to watch."

Appealing her conviction, Sharp said "many excellent issues) warrant it going forward, mostly because she's innocent of all charges. Unlike contradictory uncorroborated testimonies against her, she's never changed her account of what happened. Believe it. It's true, outrageous, and why essential to remedy by freeing and sending her home.