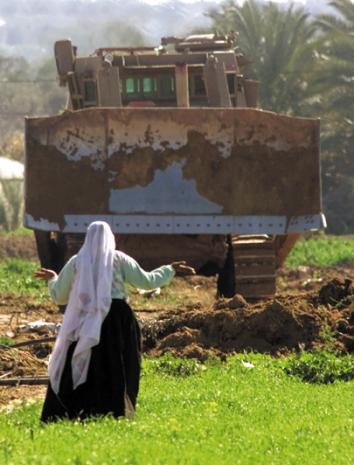 On February 18, as expected, Washington vetoed a UN Security Council resolution condemning Israeli settlements as illegal under international law. The vote: 14 yes, America the sole no, isolating the US and Israel on this long festering issue. The measure had nearly 120 co-sponsors.

"....as the United States has said on many, many occasions for many years, we reject in the strongest terms the legitimacy of continued settlement activity."

Unsaid was that America, for many decades, funded Israel generously to build them, a process continuing grievously under Obama, besides outlandish amounts of military aid, support for Israel's occupation, and partnering in all its aggressive wars.

"President Barack Obama missed a key opportunity today to demonstrate US leadership on peace. America's failure to hold both sides accountable for their actions is a contributing factor to the state of" today's moribund peace process because Washington and Israel won't tolerate it.

Nor do they support Palestinian sovereignty, ending occupation, the right of return, and long denied democratic freedoms. Instead they enforce imperial harshness against millions of oppressed Palestinians, exploited and brutalized for decades. February 18 offered more evidence how.

"going down well in the occupied West Bank. People are wondering when some action is going to be taken. People here are tired of a lack of a peace process. They are tired that the two sides are not talking. They are tired that they continue to hear, especially by (Obama) that human dignity cannot be denied" when he does it egregiously and repeatedly.

For decades, Washington used its veto power abusively to prevent any measures hostile to Israel from passing. By doing so, it arrogantly ignores the will of most other nations, at times nearly all of them, except for Israel and a few supporters. As a result, an angry UK observer once used a baseball analogy, saying: "Only the USA could have a World Series and not invite the rest of the world."

Even worse is Israel's response to UN resolutions, mostly General Assembly ones. With full US support, it ignored or flaunted dozens of them condemning or censuring its actions, deploring it for committing them, or demanding, calling on or urging Tel Aviv to end them. It continues doing so with impunity, including daily oppression, mass arrests, torture, killings, targeted assassinations, regular incursions into civilian communities, aggressive wars, and relentless settlement expansions.

Palestinian head of general intelligence, Tawfik Tirawi, said it's planned for Friday, February 25, calling the veto "blackmail," revealing America's true face and intent to subvert regional peace and flout Palestinian interests. "(T)hey are liars," he said, "who pretend to support democracy and peace. Far from it." Nonetheless, "(t)his will not affect our steadfastness and insistence on our rights." He also said "there will be no negotiations with settlements."

Before the vote, Washington tried pressuring Abbas to withdraw the resolution. An anonymous senior Palestinian official said, during an hour-long phone call, Obama made veiled threats of "repercussions" for refusing, saying:

"Obama threatened on Thursday night to take measures against the Palestinian Authority if it insists on going to the Security Council to condemn Israeli settlement activity, and demand that it be stopped. There will be repercussions for Palestinian-American relations if you continue your attempts to go to the Security Council and ignore our requests in this matter, especially as we suggested other alternatives."

"This confirms the total support by the American administration for the arbitrary police of the occupation government. It should push the PA to adopt a strategy of unity....and take a national decision to end all forms of negotiations with the (Israel) occupation." Washington is "completely biased towards the occupation and this confirms the failure of betting on a peace settlement" America doesn't want, never did, and won't tolerate as observers following the process know.

The documents showed Palestinian negotiators were duplicitous traitors, bargaining away Palestinian rights for their own self-interest. Abass and appointed prime minister Salam Fayyad were principally responsible. Abass' treachery way predates his presidency. At least from when he was chief Oslo negotiator for agreeing to Israeli demands, effectively capitulating for nothing in return. All major issues were left unresolved, including settlement population growth that more than doubled since 1993 and keeps expanding on stolen Palestinian land.

On February 19, the International Middle East Media Center said 300,000 Israeli settlers occupied the West Bank and East Jerusalem since 1993. "Currently, over 500,000 live in settlements constructed on Palestinian land occupied by Israel since 1967. The other 4.5 million Israelis live on land that was confiscated from Palestinians in 1948" to create the state of Israel.

They lost everything: their homeland, freedom, and chance to live peacefully because Israel and its Washington paymaster won't tolerate it - not then, not now, not ever unless forced.

1 Comments in Response to Obama on Palestinian Rights: Nyet

"They lost everything: their homeland, freedom, and chance to live peacefully because Israel and its Washington paymaster won't tolerate it - not then, not now, not ever unless forced."

Wow, them peaceful innocent Amish sure are being kicked down by them horrible evil Nazi Israelis - what planet are you from?

There never were any such thing as Palestinians, just Arabs, mainly Bedouins, who could travel anywhere they wanted in the Ottoman empire, until it was militarily defeated by the Allies, and Jerusalem occupied by the British, after which the resurgent fundamentalist Islamist movement that wants to restore the caliphate has been using them as pawns in its chess game of ousting Israel and the U.S., indeed all non-Muslims so that it can create a nuclear-armed caliphate then declare merciless jihad once again and terrorize the entire non-Muslim world. Until Jews began migrating en mass in the 1880s Palestine was a hellhole, and would be again if they left, little better than Cairo, where the new Hitler al-Qaradawi has returned to call for a new jihad against Israel just this month: http://bigpeace.com/amutarjim/2011/02/19/al-qaradawi-leads-friday-prayers-in-cairo-prays-for-the-conquest-of-jerusalem/

Lendman is obviously a tool of these evil forces, probably greased by Saudi money and helped by clueless leftists who think that anything that's bad for America is good for them, including Pres. Obama, who would have loved to support that U.N. resolution but reluctantly voted against it because it would become too obvious that he's a secret you know what. Smart people don't buy your Saudi-greased anti-Israeli propaganda, Lendman, sorry. Nobody in the Western world wants Muslim Arabs living next door to them, why should the Israelis? Tell the Arab govts. in the region to finally permit resettlement of the Palestinians whom they keep cooped up in miserable camps, and leave poor outnumbered surrounded Israel alone, Allah is dead.