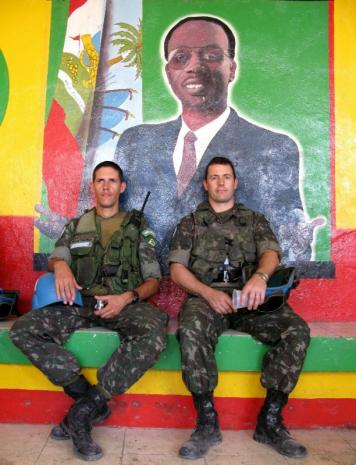 After receiving his diplomatic passport to return, Haitians eagerly await his arrival. For them and millions of global supporters, it can't come a moment too soon. Reactions express varying views.

In Port-au-Prince, thousands rallied in support "as people close to the former leader say he plans to return soon from (US-forced) exile in South Africa."

"We must have the return of Dr. President Aristide as a simple citizen to help us get better as a country as a people."

"I cannot say when exactly but he will be back before the March 20 elections."

It affirmed its "facilitating the return of former Haitian President Jean-Bertrand Aristide to his home country after years in exile."

International Relations Minister Maite Nkoane-Mashabane confirmed his request to leave, saying, "We are consulting with all interested parties to facilitate his return back home at the appropriate time," noticeably avoiding a specific date.

On Febuary 17, Reuters headlined, "Aristide to return, but as Haiti spoiler or savior?" saying:

"A month before Haiti's decisive presidential election run-off, the political figure getting all the attention is not a candidate, and he is not even in the country."

Aristide's planned return "is making waves in this volatile, earthquake-ravaged country," a man beloved by Haiti's poor "but loathed by business leaders and the wealthy," so his plans "triggered alarm bells in Washington and elsewhere."

Knowing powerful forces oppose him, "it would seem that if he truly wanted to help Haiti, he would remain away at least until after a new government is sworn into office" - ignoring his two impressive electoral victories, his 90% or more popular support, his forcible 2004 exile at gunpoint by US marines, and as a citizen, international and Haitian law affirm his right to return any time, irrespective of other events past or upcoming.

Moreover, he stated his intentions clearly - to "return to Haiti to the field I know best and love: education." Believe it! It's true, and he's entitled to use his skills freely for his people. They, of course, badly need him.

A recent rumor suggested his imminent arrival, getting Belizair Dorwing, an unemployed worker, to say:

"We want to know when (he) comes so we can gather a crowd to welcome him at the airport....the country is gripped in poverty and unemployment. It is Aristide that can save it."

Fanmi Lavalas organizer Ansuto Felix said, "We believe it's....a good thing for the health of the democracy of the country....for him to return."

However, according to Rosny Desroches, head of Haiti's Civil Society Initiative, "His return will cause tensions, he is not someone who will be able to speak a language to appease passions."

Desroches, in fact, was a member of the infamous Group of 184 Civil Society Organizations (G-184) and its Democratic Platform of Civil Society Organizations and Opposition Political Parties. CIA operatives provided aid, and America's National Endowment for Democracy (NED) and International Republican Institute (IRI) bankrolled them. They and other US agencies meddle often in other nations' internal affairs outrageously and illegally.

In Haiti, G-184 represented an anti-Aristide/Lavalas alliance of business and other Haitian elites. With Washington's support, they profited hugely by ruthless exploitation, tolerating no democratic interference. Led by businessman Andy Apaid, it was formed specifically against Aristide to oust him.

Today, his supporters and progressive observers see brazen political motives behind pressure against his return. Nonetheless, he plans and deserves to come.

His return "is long overdue. (He's) wanted to return ever since he was forced into exile in 2004."

"There is no justification for him not to; he is a Haitian citizen, charged with no crime; and the Haitian constitution explicitly prohibits compulsory political exile."

So does international law, discussed in a previous article, accessed through the following link:

America is never politically neutral, nor did it ever respect Haitian sovereignty from its 1804 liberation to today. Moreover, local authorities were pressured "into arbitrarily allowing (anti-Aristide/Lavalas) kompa singer Michel Martelly (a known past Duvalier supporter) to proceed to an elections run-off against former first lady Mirlande Manigat..." She, in fact, got 6.4% of registered votes on November 28. Martelly got 4.5%.

Haitians want neither. Aristide's Fanmi Lavalas was prohibited from participating, even though it's overwhelmingly the nation's most popular and legitimate people's party.

Round one was a sham. Round two promises more. Washington won't tolerate Haitian democracy to maintain imperial political, economic and social control, allowing no popular rights, equity or justice.

Yet Haitian and international law let registered voters alone "decide their own political destiny. New first-round elections, including Fanmi Lavalas and all eligible parties this time, are the only democratic way forward. Aristide should also be allowed to return....No foreign power," especially America, "has the right to impede it."

For over two centuries, Washington "has been the prime cause of instability in Haiti," notably since Aristide's first 1990 election. "Now that (he's) returning, we can expect to see a massive smear campaign against him in the mainstream media," full of outrageous false accusations.

Washington and supportive media reports will call him corrupt, despotic, and dangerous to regional stability, even though he's coming only a private citizen unrelated to Haitian politics. No longer can he "be denied the right to return to his country," says Weisbrot.

Hopefully, he's right saying "Washington will have to adapt to a new reality, as it is discovering in Egypt," even though Murarak's ouster (so far) changed nothing, nor will it unless committed popular pressure persists for thus far unachieved democratic governance. Wherever imperial Washington has interests, harsh realities present daunting challenges against it. For sure, Aristide and honest observers understand.