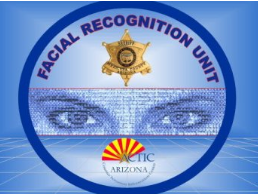 The Real ID Act 2005: The reality versus the myth and why you should care

by Mark Lerner (with permission)

How is it possible to have so much information about one issue being published and most of the information is not correct?

The Real ID implementation deadline has been extended. The truth is, unfortunately, this is no cause to celebrate.

Real ID is not about being a Republican or Democrat. Over 600 groups covering the entire political spectrum oppose Real ID.  Religious denominations of nearly every faith have and are opposing Real ID.  The Republicans proposed the legislation but Democrats also supported it.  The legislation passed in the U.S. Senate without one “Nay” vote.  There were tricks and shenanigans involved like attaching Real ID to other legislation that was a sure lock to pass.  The Democrats after the fact took their best shot and attempted to have their own legislation passed called “PASS ID”.   PASS ID was not an improvement.  It contained many of the most onerous aspects of Real ID.

The Department of Homeland Security said, with Real ID there were no new biometrics. How about facial recognition?   In 2005 when the Real ID Act 2005 was signed into law the majority of states were not using facial recognition technology.

That’s right; you are being enrolled into a single global system of identification and financial control.  By the way ICAO is an acronym for International Civil Aviation Organization, an agency of the United Nations.

Still not convinced of the international standards? Meet AAMVA (American Association of Motor Vehicle Administrators).   AAMVA is about as American as the Canada’s Royal Mountain Police.  Take a look at AAMVA’s website

AAMVA is growing.  The past jurisdiction included the states of the United States and the provinces of Canada.  The same year NAFTA (North American Free Trade Agreement) was ratified 1994, AAMVA came up with the great idea of adding the districts of Mexico to their jurisdiction. In the final rules of the Real ID Act 2005, published in January 2008 by DHS, AAMVA is named the “hub” and “backbone” of the Real ID Act 2005.

People may think that they are immune from the Real ID Act because their states have passed laws or resolutions prohibiting participation in the Real ID Act.  Not so quick; think of the right hand and left hand not knowing what each other is doing.  Maybe our lawmakers said “No!” but the bureaucrats are still saying “Yes”.

Real ID is just a name. By virtue of a simple name change the state legislation that has been enacted opposing Real ID will be neutered. The legs of the chair are the eighteen benchmarks required to be met for a state to be Real ID compliant.  The first benchmark is the digital facial image that meets those pesky standards adopted by the ICAO for facial recognition technology.

How many of the eighteen benchmarks have your state met? The answer might surprise you.

At least 11 states have met all 18 of the benchmarks. 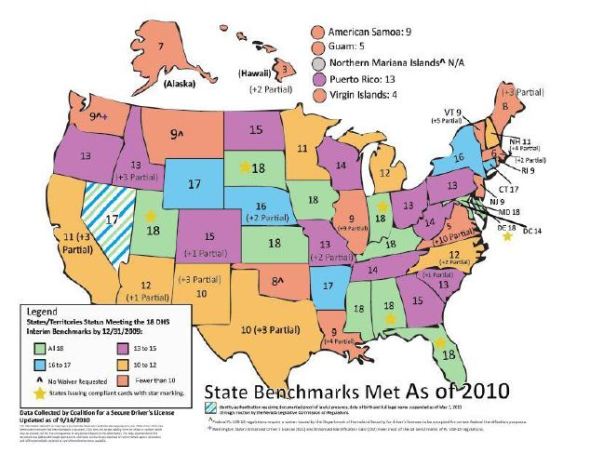 Before the latest extension we were looking at a deadline of May of this year.  Why isn’t this good news?  Because most people will falsely believe that they don’t have to worry or that they still have time to spare. They don’t.   The bureaucrats will continue to move forward on meeting the eighteen benchmarks just as they have been doing all along.

There is one other minor detail that is often not discussed.  There are two parts to the Real ID Act 2005; Title I and Title II.  Title II is the part most people are familiar with and have objections to. Title I deals with immigration.  The immigration aspect is an avenue that Congress may use to address Real ID issues.

Congress may decide to stick with Real ID and offer states more money to change their decisions or coerce states by threatening to withhold money.  I believe Real ID or at least part of it will be repealed and new legislation passed and signed into law but you can expect the eighteen benchmarks to change little if at all

The Constitutional Alliance was formed as a direct result of the Real ID Act.  Biometrics, information sharing and related issues are the focus of the Alliance. We believe that protecting the sovereignty of citizens, states and the United States of America is a must.

There are a number of organizations and groups that the Constitutional Alliance www.constitutionalalliance.org and the Stop Real ID Coalition www.stoprealidcoalition.com  work with to ensure that you get the most accurate information possible.   Go to the Constitutional Alliance website and look at the Real ID documentation available so that you will be able to discern between what is “real” and what is “myth”.  If you have any questions you can reach us via the “contact” button on our website.

The only two questions I have are 1) If not now, when will citizens become engaged?  2) Why do we hear “national” and not “international” ID?  This is exactly what we are up against.

Mark Lerner leads the Stop Real ID Coalition and is a spokesperson for the Constitutional Alliance, a coalition of individuals and groups committed to preserving state and national sovereignty, the unalienable rights to life, liberty, and property as pronounced in the Declaration of Independence and protected under the Bill of Rights.

Pentagon testing mass surveillance balloons across the US

Here Are the Countries Where China Spy Balloons were Also Spotted Up in the Sky...