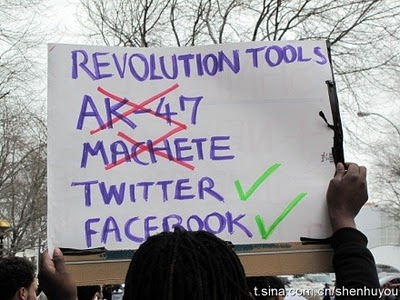 In the last couple of weeks, I've come across some rather interesting inside accounts of how the revolution in Egypt actually went down. Now, realize that these are being told by lamestream sources, so watch carefully... but I found them to be very interesting. The first 2 were aired on PBS' Frontline program a couple of weeks ago. Unfortunately, they don't allow direct embedded video, but you can follow this link to check out the full videos.

There are 2 separate stories on the page.  The 1st one is about embedded journalists that were on site with the Twitter and Facebook activists, some pretty interesting stuff... the whole crew they were working with got arrested by secret police and taken away for several days.

The 2nd report is about the Muslim Brotherhood and how the new, young guard is displacing the old brotherhood tactics.
And then yesterday, TED talks released a video as well, I can embed it, so here you go.