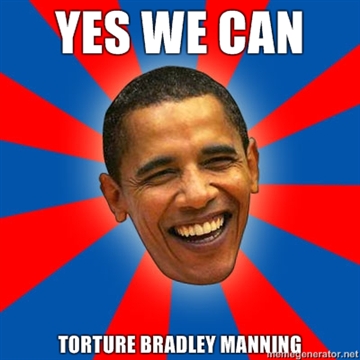 A previous article discussed him in detail, accessed through the following link:

Another discussed torture as official US policy, institutionalized under Bush II, continued under Obama, practiced despite official denials, accessed below:

Manning, of course, is the courageous Army intelligence analyst turned whistleblower, who admitted leaking thousands of diplomatic cables, many others from Iraq and Afghan war databases, as well as two or more explosive videos, showing US air strikes murdering civilians. As a result, he felt obligated to reveal them. They're criminal acts, demanding prosecution of everyone up the chain of command ordering them.

At great personal risk, Bradley heroically disclosed them. He and others like him deserve praise, not prosecution. They're heros, risking personal harm to reveal disturbing truths, what government and media reports suppress, sanitize and distort, letting warlords plunder lawlessly so war profiteers can cash in. Americans are the worse off for it.

"US Army officials transferred PFC Bradley Manning from the Theater Field Confinement Facility in Kuwait to the Marine Corps Base Quantico Brig in Quantico, Virginia, on July 29. (He) remains in pretrial confinement pending an Article 32 investigation (like a grand jury or preliminary hearing) into the charges preferred against him on July 5."

"The criminal investigation remains open....findings and recommendations (will determine) whether to recommend (if) the case (will) be referred to trial by court-martial."

It's planned. The Pentagon and Obama administration will throw the book at him, perhaps imprisoning him for life, instead of hailing him as a hero.

Meanwhile for nearly 10 months, he's been horrifically treated in solitary confinement, charged with using unauthorized software to obtain classified information from government databases, unlawfully downloading it, improperly storing it, and releasing it publicly.

Initially, he faced 12 counts of leaking classified information. In early March, 22 additional charges were added, including "knowingly giv(ing) intelligence to the enemy, through direct or indirect means," in violation of Article 104 of the Uniform Code of Military Justice, called "aiding the enemy," potentially carrying the death penalty. The enemy is defined as any hostile nation, organization, or body US forces oppose.

If convicted of the most serious charges alone, he'll forfeit all pay and allowances, be reduced to the lowest enlisted pay grade, be dishonorably discharged, and imprisoned for life - to show other potential whistleblowers what they'll face if caught doing the same thing. Prosecutors told Manning's lawyer, David Coombs, that capital punishment won't be recommended. However, the presiding military judge may impose it.

"Exposing war crimes is not a crime," it states!

Access it through the following link for updated information on his status and efforts on his behalf:

Its purpose is to:

-- "Harness the outrage felt by millions (viewing) the 'Collateral Murder' video into a coordinated defense of Manning;

-- Raise awareness" about his arrest, charges and likely court-martial;

-- "Coordinate" efforts to support him;

-- "Collect funds (for a) high-quality" defense;

-- "Provide supporters with accurate, updated information as the" pretrial hearing and likely trial progress; and

-- "Provide prisoner support for (him) throughout his imprisonment."

On March 19 and 20, supporters across America will rally on his behalf. They're calling on others worldwide to join them, highlighting former State Department spokesman PJ Crowley's firing for saying Manning's treatment is "ridiculous and counterproductive and stupid," omitting its lawlessness. In his "resignation" statement, he added:

"The exercise of power in today's challenging times and relentless media environment must be prudent and consistent with our law and values."

No matter that as Assistant Secretary of State for Public Affairs, from May 26, 2009 to March 13, 2011, Crowley served imperial interests loyally, defending its lawlessness. Belatedly, he objected to Manning's treatment after nearly 10 months of torture, nonetheless, defending his incarceration.

In violation of US and international law, he's been subjected to brutal, inhumane treatment, despite being a model prisoner. Nonetheless, he was declared a "Maximum Custody Detainee," subjecting him to the harshest detention conditions, including:

-- one hour alone outside in an isolated room, shackled, allowed to walk in circles, and returned to his cell the moment he stops;

-- directly and by video surveilled constantly;

-- barred from accessing any news or other information;

-- forced to respond to guard inquiries almost every five minutes all day;

-- awakened at night for being out of full view, curled up under very uncomfortable blankets;

-- denied a pillow and sheets; and

-- since early March, forced nudity, brig officials telling The New York Times he'll be kept that way at night and outside his cell mornings for inspection "as 'a precautionary' measure to prevent him from injuring himself."

"There can be no conceivable justification for requiring a soldier to surrender all his clothing, remain naked in his cell for seven hours, and then stand at attention the subsequent morning. This treatment is even more degrading considering that Pfc. Manning is being monitored - both by direct observation and by video - at all times."

"We are concerned that the conditions inflicted on Bradley Manning are unnecessarily severe and amount to inhumane treatment by US authorities....Manning has not been convicted of any offense, but military authorities appear to be using all available means to punish him while in detention. This undermines the United States' commitment to the principle of the presumption of innocence. The repressive conditions imposed on Manning breach the US's obligations to treat detainees with humanity and dignity."

According to UCLA Professor Mark Kleiman:

"The United States Army is so concerned about Bradley Manning's health that it is subjecting him to a regime designed to drive him insane....This is a total disgrace. It shouldn't be happening in this country." Addressing Obama, he added, "Silence gives consent."

Earlier in March, Manning wrote brig authorities, requesting his isolation and Prevention of Injury (POI) status end, saying the military psychiatrist's repeated requests were denied. Moreover, he stressed that other detainees remain isolated for two weeks or less. Only he's endured it long-term.

A previous article addressed the harmful effects of prolonged isolation, accessed through the following link:

Over time, it causes:

-- for many, a totally dysfunctional state and inability ever to live normally outside of confinement.

-- "People come in here with a few problems and will leave sociopaths;

-- You're like a "caged animal. I've seen people just crack and either scream for hours on end or cry."

-- We "have a sense of hopelessness. Plus my anger (is) a silent rage....I am beginning to really hate people."

-- "They....try to break a person down mentally (and) mental abuse leaves no evidence behind (like) physical abuse."

-- Others say isolation is like being buried alive or living in a tomb.

When long-term, it causes irreversible psychological trauma and harm, a condition no society should inflict on anyone, nor should lawmakers allow it. Moreover, virtually no one experiences it unscathed. Inflicting it constitutes torture. Even those strongest-willed break.

It's why forced isolation violates the Geneva Conventions, the Universal Declaration of Human Rights, the UN Torture Convention, and the UN Convention on the Elimination of All Forms of Racial Discrimination. In 1995, the UN Human Rights Committee called long-term prison isolation incompatible with international standards, and in 1996, the UN Special Rapporteur on torture and other cruel, inhuman or degrading treatment or punishment agreed.

At a March 11 press conference, he deceitfully answered a question as follows:

"With respect to Private Manning, I have actually asked the Pentagon whether or not the procedures that have been taken in terms of his confinement are appropriate and are meeting our basic standards. They assure me that they are. I can't go into details about some of our concerns, but some of this has to do with Private Manning's safety as well."

When asked if he agreed with PJ Crowley, he said, "I think I gave you an answer to the substantive issue," again ducking it entirely, defending the indefensible.

One of his few visitors, David House, expressed concern, based on firsthand observations, explaining when he "first visited him he was a very bright eyed intelligent young man, very full of life....But (around) November something started to change." Weeks later he couldn't hold normal conversations, from sheer exhaustion and mental deterioration.

Afterward, it got worse. "There was some physical trembling, (and) there was a point at which he appeared to be almost catatonic," unable to converse normally. "He seemed to be undergoing a very obvious and very extreme decay from his former self."

Overall, his treatment has been emotionally devastating, and the longer it continues, the worse it gets. It's a deliberate policy to break him, turn him into mush, the same condition others isolated long-term experience.

Based on his own Vietnam incarceration, John McCain said, "It crushes your spirit and weakens your resistance more effectively than any other form of mistreatment." Enough to make anyone do or say anything to stop it.

Manning is being emotionally destroyed, assuring his inability to defend himself properly at trial. The Pentagon plans it, besides extracting vengeance and warning other whistleblowers what they'll face if they dare emulate him. Obama very much concurs, showing he's as lawless as Bush.

Germany (and Europe) on the Brink