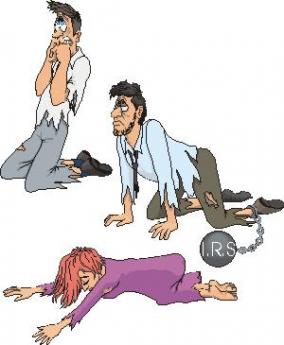 Ernest Hancock
The following 2 blogs explain how we, in North America, have been supposedly converted into State owned slaves:

Blog 1:
The NAME GAME Explained
Recent research here in Canada shows that the income tax is imposed based upon the \'property right\', and that property right is the property right of the corporate Crown in Canada, and corporate State (be it a State or the UNITED STATES) in the USA.

The ‘Crown’ is the administrative corporation of the Pontiff of Rome owned City of London, the financial, legal and professional standards capitol of/for the Vatican, The City of London is a square mile area within Greater London, England, and is an independent city-state.In the USA, the administrative corporation for the Pontiff of Rome is the UNITED STATES, and that corporation administers the Vatican capitol for military purposes called Columbia, or the District of Columbia. The UNITED STATES also administers the 50 sub-corporate States of the United States of America, identified with the 2 cap letters – CA, OR, WA, etc.

All adult humans are deceived into using the fiction name, as imprinted on the copy of the birth certificate you receive when ordering it from Provincial/State Vital Statistics, or to whatever source you apply. Although the birth certificate is of somewhat recent origin and used to formally offer \'citizens\' as chattel in bankruptcy to the Pope\'s Holy Roman Empire owned Rothschilds\' Banking System, the false use of the family name goes back into the Middle Ages in England. Thus, it is with the family name made a primary, or surname,  (Mister Jones), and the given names of the child (Peter) made a reference name to the primary name. This is the reverse or mirror image to reality. A \'family name\' is NOT a man\'s name - it is a name of a clan - a blood relationship. [Replace the name, Peter Jones, with your given and family name.]

We are then \'forced\' or \'obliged\' to use that name in all commercial and Government dealings and communications. So, when we do use it, as 99.99% of the human inhabitants of North America do, we supposedly \'voluntarily\' attach ourselves, the free will adult human, to the Crown/State owned property, called the \'legal identity name\'.

The Crown/State then invokes the legal maxim, accessio cedit principali, [an accessory attached to a principal becomes the property of the owner of the principal], where the principal is the legal identity name as \'intellectual property\', the owner is the corporation called the Crown/State or UNITED STATES, and the accessory is the free will human who has supposedly volunteered himself to be \'property by attachment\' of the Crown/State. An adult human who is property is, and by any other name, a \'slave\', be it citizen, subject or freeman.

As a slave, one\'s property in possession, including body and labor, belongs to the slave owner 100%. And, the property right is a bundle of rights - own, use, sell, gift, bequeath and hypothecate property.

Thus, ALL \'income\' resulting from the owned human slave\'s mental and/or physical labor belongs to the slave owner. That which is left with or granted to the slave for his own use and maintenance is called a \'benefit\'. In Canada, the \'return of income\' [the phrase itself tells the story] is called a T1 \'tax and benefits package\'. The T1 or 1040 is an accounting by the slave of his fruits of labor that belongs to the slave owner, and the prescribed \'benefits\' that he may keep or have back from withholding. Thus, all income tax cases\', in reality, result from fraud, illegal concealment and theft by the accused slave of the \'slave owner\'s property\'.

Going back to an above paragraph, we find that the attachment of oneself to the Crown/State owned name is \'assumed to be voluntary\', as the Crown/State has no valid right to impose slavery upon adult humans against their will. And, constitutional prohibitions of slavery only incompasses \' involuntary servitude\', not \'voluntary servitude\'. Anyone working as an employee is in a contract of voluntary servitude - direction and time control by, and obedience and loyalty to the employer. Until we ‘assumed to be slaves\' get our heads around this key to the lock that holds our chains of slavery around our necks and ankles, we will continue to attempt to swim with that 100 lb ball chained to our leg.

A POSSIBLE REMEDY
However, since we are \'forced to\', or \'obliged to\' use the Crown/State owned legal identity name in all commercial and government dealings, services and communications, we can make a \'claim of right\' under the Rule of Private Necessity – with the necessity being the means to sustain and maintain our life, as all food, shelter, clothing, means of travel and that which answers our need for happiness all has to be obtained or used in the realms of commerce. Briefly, commerce is all communications, contracts, and other interrelations and interactions with other parties, which includes government.

This should counter the claim that we \'voluntarily\' attach ourselves to Crown/State property. Repeating - The Private necessity is that we cannot do anything in relation to life, liberty, property or due process of law without using the Crown/State owned name, and thus we cannot sustain or maintain our lives without that fiction name.

Also, a Freedom Of Information Demand should be sent to the Minister, or Representative requesting the authority, date, means and methods by which you, a free will man (m or f) became a slave owned by the corporate Crown or State.

A process that has worked recently in Texas is the \'surrender\' of the copy of the birth certificate one has in possession to a judge, or the judge assigned to a case where you, in the legal identity name, are the defendant, in an \'in chambers\' hearing. Some call this \'surrender\' of the defendant (the legal identity name) as being on the \'private side\' using the Biblical method of settling disputes privately if possible.

This is preferred to \'surrendering it in court\' as that is on the \'public side\', and as a human presence in the court  room, the assumption that you are an attachment to the legal identity name has already been made. And being attached as an accessory to it, you become surety, guarantor and do \'represent\' the legal identity name defendant.   End

Blog 2:
As the blogger Adam Ash explains, the term “enemy combatant" (disobedient slave) means a legal non-person. The Italian philosopher Giorgio Agamben likens them to the first humans to be so designated, under Roman law a few millennia ago. They didn\'t call them “enemy combatants” then, they called them “homo sacer”. This was a human who could be killed by anyone, without the killer ever being guilty of homicide.

In fact, the idea of “homo sacer” was contrived as an excuse to impose justitium, or a state of exception, that is to say a suspension of civil liberties and the imposition of martial law. Agamben argues: "The so-called sacred and unalienable rights of man prove to be completely unprotected at the very moment it is no longer possible to characterize them as rights of the citizens of a state." Unquote

Apparently President Washington and Lincoln used “justinium” during their time in office. FDR\'s \'War and Emergency Powers Act 1933\' made all people (US and State citizens) \'enemies of the UNITED STATES\'. This set up the structure for this latest legislative activity by Congress and Bush eliminating all rights of \'due process\'.

“In no trial or hearing under this act shall the testimony of such alleged fugitive be admitted in evidence;” - And then continues to say that the “certificate” of the agent is sufficient for conviction (guilty as charged), and that no suit can be brought against the magistrate(judge) or against the agents of the master/owner of the slave.

if you are a child of God, you are responsible for following God's word and his word ONLY. people, you have been brainwashed listening to this story. There is no law stating that if you working class citizen, you are not required to file income taxes. How are you going to fight the whole country? Born again believers are not of this world. we are supposed to be different from the world and the system. this is the end of times. Get your lives right with God before it is too late.follow and live like christ and not man.