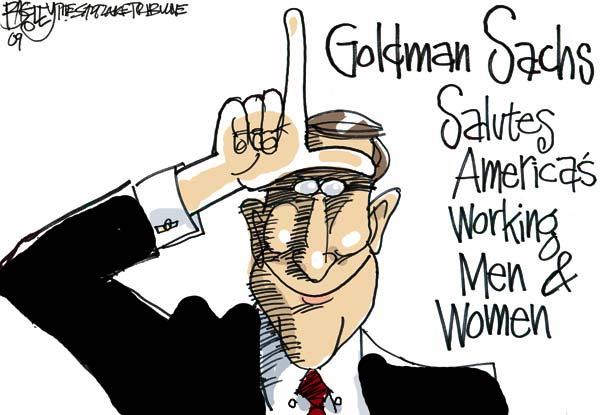 Goldman Sachs is expected to earmark about $5bn (£3bn) for staff pay and bonuses this week, days after being accused of securities fraud by the US regulators, fuelling the controversy over bankers' rewards in the teeth of the financial crisis.

Chief executive Lloyd Blankfein is expected to unveil revenues of $11bn for the first quarter of this year on Tuesday, up from $9.4bn in the same period of 2009. About 47% of that will go into a "compensation pool" for bosses and employees.

The bank, along with Fabrice Tourre, one of its vice presidents, is the subject of a civil fraud complaint by the US Securities and Exchange Commission (SEC). It denies the accusations and is understood to believe they are the result of a politically motivated witch-hunt – timed to coincide with a drive by President Obama to get tough on banks, and to come just ahead of its results.

The bank has been aware of the SEC's investigation for two years but had not spoken to investigators since September 2009 and is thought to have been taken by surprise by last week's events. Tourre has been interviewed by Goldman's internal compliance department but is still employed by the bank and has not been suspended.

Speculation over Blankfein's future is seen by insiders as "silly". However, the episode is likely to have incurred the ire of US investor Warren Buffett, who lost more than $1bn on paper in 24 hours on warrants held by his Berkshire Hathaway investment fund as Goldman shares plunged. Buffett endorsed the bank by loaning it $5bn at the height of the crisis at 10% interest. He is an outspoken critic of Wall Street sharp practice and excessive pay. Senior Goldman executives have held talks with major investors, thought to include Buffett, over the SEC accusation.

Blankfein is also anticipating tough questioning later this month on Capitol Hill. Along with other financiers he is expected to testify before the Senate's permanent subcommittee on investigations. The panel's head, Democratic senator Carl Levin, said it had discovered levels of greed that were "frankly disgusting".

Goldman made record profits of $13.4bn last year, after net revenues more than doubled to $45.2bn, racking up at least $100m in net trading revenues every other working day. This came after the demise of several rivals and despite the bank coming close to disaster itself when the crisis was at its height. It took $10bn of US government money, which it has since repaid.

Amid widespread popular anger against the banks, Goldman last year shrank its bonus pool to 36% of revenues rather than the usual 50%. Despite reining in, however, it still paid out a total of $16.2bn. Blankfein was awarded a $9m bonus in shares in 2009, down from the $68m he received in cash, shares and options in 2007.

Due to accounting rules, Goldman sets aside a higher proportion of revenues for staff rewards at the start of the year. The rate at which they are accruing for 2010 overall is likely to drop in subsequent quarters, to end up at about the same as in 2009.

FBI Sends Out Warning Advising Against Buying, Making or Misrepresenting a Vaccine Card...