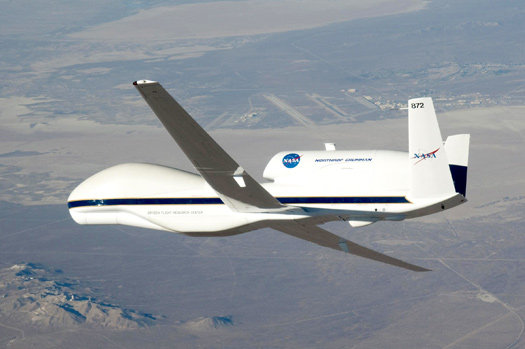 So far this hurricane season, the Atlantic has been quiet. That's good news for Gulf oil spill cleanup efforts, but a team of NASA and NOAA scientists are hoping things will get just a little nastier.

This weekend, NASA is launching a six-week mission to study the formation and intensification of hurricanes, hoping to inform forecast models and improve hurricane prediction abilities. The GRIP experiment (for Genesis and Rapid Intensification Processes) involves more than a dozen satellite-quality scientific instruments onboard a Global Hawk unmanned drone, a converted WB-57 cold-war bomber and a modified DC-8.

Ramesh Kakar, the weather focus area leader for NASA's science programs, says the goal is to improve understanding of the physical processes that generate hurricanes. He hopes forecasters will assimilate GRIP data into their prediction models, improving forecasts and providing earlier warning for communities in a burgeoning hurricane's path.

So he's hoping for some storms.

"Of course I do not want these to get to the land -- just allow them to be spinning and then just move on," he says. "But yes, I hope we do get enough cases, that Mother Nature allows us to see enough genesis cases so that we can say this was a successful mission." The mission is timed to take advantage of the peak hurricane season, which generally starts in mid-August.

Are they going to study HAARP?  Twilight Zone on Steroids