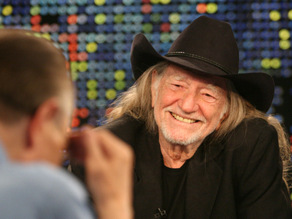 On the road again, headed back to the "Live Music Capital of the World" (better known as Austin, Texas) around November of last year, legendary musician Willie Nelson was stopped by police in Hudspeth County.

Smelling marijuana in Willie's trailer, cops conducted a search, found the stash, and took the "Red Headed Stranger" to jail.

Released hours later on a $2,500 bond, things weren't looking good for Nelson. He was facing up to a year in jail, over what police claimed was roughly six and a half ounces of weed.

In Texas, that kind of weight can put a person away for a long time, depending upon where the offense occurs. One unlucky soul recently found that out the hard way, pulling down a 35-year sentence in Tyler, Texas for having just over four ounces in his vehicle, which was parked in a school zone.

Facing a prosecutor who could have decided, as they often do, to "send a message," all manner of ill could have befallen Willie.

Instead, he's getting off for a song. Literally.

Although charged with the possession of six plus ounces of weed, Nelson will please guilty to possessing just over three thanks to Hudspeth County Attorney C.R. "Kit" Bramblett, who openly calls Nelson his "favorite artist."

Speaking to reporter Sterry Butcher at The Big Bend Sentinel newspaper, Bramblett, now 78, confessed that he'd admired Nelson all his life. He even joked that they'd maybe helped Willie out a bit.

“Between me and the sheriff, we threw out enough of it or smoked enough so that there’s only three ounces, which is within my jurisdiction,” he quipped, before explaining that the extra weight was actually due to excessive packaging.

If that's indeed the case, Willie isn't actually getting special treatment. In fact, most misdemeanor possession cases that draw a guilty plea are handled by mail.

With the official charge now reduced to a misdemeanor, he'll be ordered to pay a $100 fine and $278 in court fees. But instead of being allowed to simply plead guilty and mail in his payment, Bramblett said the county judge was adamant that Willie would have to come in.

That means Nelson will likely be required to drop by and make the payment in person.

While he's there, the Sentinel added, they'll also be asking for a private performance of Willie's classic song, "Blue Eyes Crying in the Moonlight" -- in a case likely to be remembered as one of the most unusual applications of "community service" ever seen in the state of Texas.

This video is a Willie Nelson performance of "Blue Eyes Crying in the Rain" from 2006, courtesy of the Austin City Limits music festival.

So much for equal protection under the law. The criminal government sees some of us as more equal than others.

must be nice to be rich and famous.   Conversely the SADO-MACHISISTS who run our government must enjoy watching people grovel to them for the fact they make something that grows NATURALLY to be illegal.

'Did you really think we want those laws observed? We want them to be broken. You'd better get it straight that it's not a bunch of boy scouts you're up against ... We're after power and we mean it. There's no way to rule innocent men. The only power any government has is the power to crack down on criminals. Well, when there aren't enough criminals one makes them.' - Ayn Rand, From the Book "Atlas shrugged"