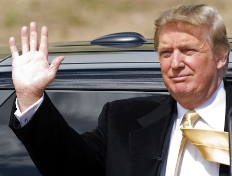 Donald Trump received over three times as much news coverage than Republican presidential candidate Rep. Ron Paul (R-TX) this year, according to a report by the Pew Research Center's Project for Excellence in Journalism.

The real estate mogul and reality television star briefly considered running for president in the spring.

After Paul came in second place in the Ames Straw Poll in a near tie with Congresswoman Michele Bachmann (R-MN), Politico chief columnist Roger Simon and The Daily Show host Jon Stewart both noted that the Texas congressman had not received the media attention he deserved.

Again, the "New Common Era" of the most common of men and women is well under way...I'm surprised that Trump hasn't declared himself chancellor, at least.

Better Trump than Perry. Did I just "say" that?

I think we will all discover that "in the land of the blind" everyone is blind!

I have already explained why …Ron Paul is not there to win the nomination.

Media covers Donald Trump twice as much as it pays attention to Ron Paul … and you wonder why … and why won’t they? Unlike Paul, Trump is real, a strong candidate with an excellent chance to be the next president of the United States. Paul? Millions of Americans believe his chance is nil, if not Zero [see the records, and read further why]. I may not vote for Trump, and I have nothing against Paul ... I am just stating and articulating the obvious.

The public believes – and we in the Media know this because I am one of those curious media people – that Paul is always a repetitious candidate in every presidential election year, a perennial nomination-hunter in any straw poll election drive held anywhere, and will always be. Unlike Donald Trump he couldn’t be and will never be president and the Media always after sensational news knows that too. So, insofar as Media attention on Paul is concerned, where’s the thrill … where’s the attraction?

"They" [his image-makers, most of them are Libertarian paper r3volutionaries] see to it that Paul always speaks the contrary of any issue -- and with determination and anger, the better -- even though he would sound ridiculous, in order to attract media attention, but insulting the intelligence of the American audience doesn’t work for him that way.

With a dangerously molded fake image, Paul’s "butt-pushers" – like those professional butt-pushers of Tokyo’s rail stations that with their two bare hands forcibly push the butts of passengers literally, to get them into the train quickly before the door closes -- are pushing him so hard that he always gets stuck in the campaign trail and couldn’t get to his destination … the GOP presidential nomination!

To millions of Americans that kind of public made-over that his "butt-pushers" had tailored for him is considered dangerous because he is now known to speak for that angry segment of society; to speak for the outrage of those who hate the Government, the State, the System and/or the so-called "Establishment", especially for those who in the inner darkness of their heart really believed that the United States of America, the country where "they" live, is an "Evil Empire" that they must destroy by any means fair or foul.

To millions of worried Americans, to promote or encourage a candidate like that is treason!

The Main Stream Media [MSM] – not the Alternative Media, like FP.com and similar others – has nothing to do with it. In spite of all its demons and notwithstanding all those many hidden skeletons in the closet, MSM cannot support let alone devote its attention to a candidate that represents Jared Lee Loughner, the Unabomber, Timothy McVeigh and their kind, and with that attention and support send him to White House to sit in the Oval Office.

This at least explains why RP has less Media coverage if there is any at all, than Donald Trump.

Anyway, you can read more the details of all these in "Ron Paul Is There But Not To Win The GOP Nomination at.