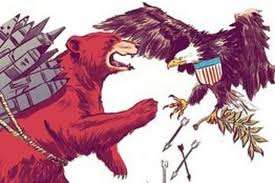 f you believe that the United States is the "sole superpower" in the world, then you really need to read the rest of this article.  Most Americans have very little idea what is actually going on in the rest of the world and how the global balance of power is shifting.  For example, can you name the country that is the number one oil producer in the world, the number one oil exporter in the world, the number one exporter of natural gas in the world and that also has the second most powerful military in the entire world?  In case you need a hint, it is not Saudi Arabia, it is not China and it is not the United States.  The correct answer is Russia.  The Russian Bear is back in a big way.  Did you know that Russia is rapidly becoming one of the top suppliers of oil to the United States?  Russia has vast natural resources, a national debt that is very low (ratio of publicly held debt to GDP is less than 10%) and an economy that has boomed over the past decade.  Russia is busy flexing its muscles in many different ways.  For example, many are pointing out that the "Eurasian economic union" that Russia is putting together is a significant move in the direction of a revival of the Soviet Union.  Russia is also rapidly modernizing its military and developing very powerful new weapons systems.  Most Americans believe that the Cold War is over and that Russia is a toothless bear that no longer represents a threat.  It is difficult to find words to describe how wrong that assessment of the situation is.

The other night during the Republican debate the candidates said next to nothing about Russia.  It was almost as if the second most powerful superpower on the planet did not even exist.

That debate was yet another example of just how bizarre our foreign policy has become.  As you will see below, if there is one country on the face of the planet that could defeat the United States in a war, it is Russia.

And if you believe that Russia is now our "friend", then you have been seriously deceived.

1 Comments in Response to The Russian Bear Is Back, The Soviet Union Is Being Revived And The Cold War Is Not Over

Tesla Will Rapidly Grow the Number of Gigafactories Under Construction