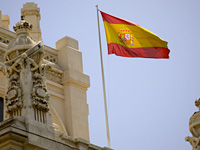 The report, due to be published Monday, will also outline overall needs of 90 billion euros to clean up Spain's entire banking sector, with healthy banks covering a big chunk of this sum, one of the sources said.

"The capital shortfall for the Spanish banks will be around 40 billion euros after taking into account the capacity from some of the entities to cover expected losses with their own resources," the source told Reuters.

Government sources declined to confirm the figures, and one source who has been briefed on the matter cautioned that the IMF may not have finalized its estimates.

The report by the IMF,  along with an audit of the Spanish banking sector conducted by consulting firms Oliver Wyman and Roland Berger, will help determine the size of a bailout for Spanish lenders currently being explored in Madrid, Brussels and Berlin as a way to restore confidence in Spain and the euro zone.

The country's borrowing costs have soared in recent weeks over concerns it would not be able to prop up banks hit by a property crash in 2008, and rein in its public finances.

A 'Liberty' Rebellion in Idaho Threatens to Undermine Coronavirus Orders

Behind the scenes, private equity angles for a piece of stimulus

Millennials, Burdened With Debt, Are Now Facing an Economic Crisis

Pandas use lockdown privacy to mate after a decade of trying