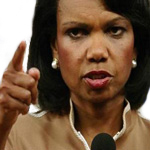 But halfway through the article, the text takes a really weird turn toward Ms. Rice's political viewpoints as expressed above to a "Utah retreat of big Republican donors."

This caught our collective attention because not only is her presentation entirely wacky, it was "well received" by those that she presented it to and then further presented as a serious perspective on CBS television.

The point that stands out the most is her statement about the "importance of the United States to a more peaceful world" and that this world needs a "strong American anchor." While this might be true hypothetically, in reality the only way that America is important to peace is unfortunately its leaders' attraction to war.

The US in its current incarnation facilitates war. It is important to "peace" the way a weapon is important to violence, not as a deterrent but as an adjunct. Ms. Rice's statements therefore are far more revealing of the current state of the "formal" political and media dialogue that exists within the United States than they are as a summation of reality.

Under Ms. Rice and her boss the US military-industrial complex was given virtually free rein to pursue fairly major wars in Iraq and Afghanistan and smaller, less-reported wars in numerous other countries in the Mideast and upper Africa.

As we've pointed out before, along with numerous other alternative media publications, these wars resulted in the deaths or injuries not of thousands but of millions. The culprit is the depleted uranium weaponry in use by NATO and American forces.