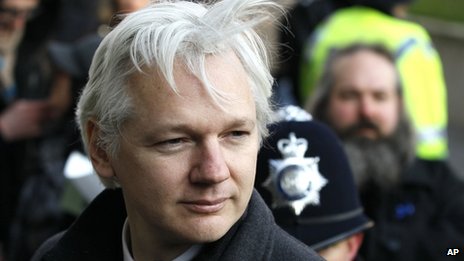 It cited fears that Mr Assange's human rights might be violated.

Foreign Secretary William Hague said the UK would not allow Mr Assange safe passage out of the country.

But Ecuador's Foreign Minister Ricardo Patino said his government would seek to negotiate with Britain over arrangements for Mr Assange to leave.

"We don't think it is reasonable that, after a sovereign government has made the decision of granting political asylum, a citizen is forced to live in an embassy for a long period," he said.

Mr Assange took refuge at the embassy in June to avoid extradition to Sweden, where he faces questioning over assault and rape claims, which he denies.

Mr Patino had accused the UK of making an "open threat" to enter its embassy to arrest Mr Assange, an Australian national.
Mr Assange said being granted political asylum by Ecuador was a "significant victory" and thanked staff in the Ecuadorean embassy in London.

However, as the Foreign Office insisted the decision would not affect the UK's legal obligation to extradite him to Sweden, Mr Assange warned: "Things will get more stressful now."