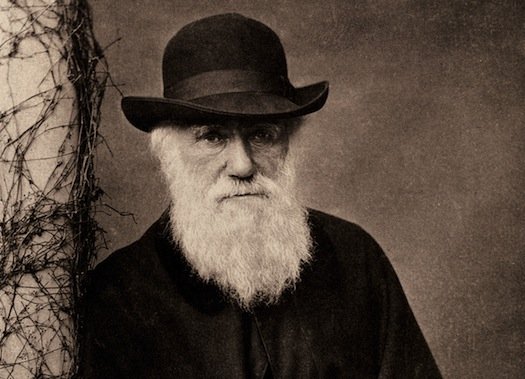 Imagine a dark, stormy night in the South Atlantic at the end of December 1832. Aboard the Royal Navy survey vessel HMS Beagle a young naturalist, racked with seasickness, staggers on deck. A sudden wave makes the ship heel violently, and he is washed over the side. The lookout calls “Man overboard!” but it is too dark to see anything in the churning sea, and the storm is too fierce for the officer on watch to risk turning the ship about. Charles Darwin is gone, and Captain Fitzroy will have to face the task of writing to his family in England to break the news. He will certainly tell them that in addition to their personal tragedy, the scientific community has lost a promising young naturalist who might have achieved great things. But he has no idea that Darwin’s greatest achievement would have been to write one of the most controversial books of the century, a book that Fitzroy himself would have denounced in public: On the Origin of Species.

What would a world without Darwin look like? Many have argued that science would have developed much the same. His theory of evolution by natural selection was “in the air” at the time, an inevitable product of the way people were thinking about themselves and the world they lived in. If Darwin hadn’t proposed it, then someone else would have, most obviously the naturalist we know as the “co-discoverer” of natural selection, Alfred Russel Wallace. Events would have unfolded more or less as we know them, although without the iconic term “Darwinism” to denote the evolutionary paradigm. But Wallace’s version of the theory was not the same as Darwin’s, and he had very different ideas about its implications. And since Wallace conceived his theory in 1858, any equivalent to Darwin’s 1859 Origin of Species would have appeared years later. There probably would have been an evolutionary movement in the late nineteenth century, but it would have been based on different theoretical foundations--theories that were actually tried out in our own world and that for a time were thought to overshadow Darwin’s.

The impact of Darwin’s theory was not limited to science itself.
Darwinism was eventually rescued when the new science of genetics undermined the plausibility of the rival theories of evolution following the “rediscovery” of Mendel’s laws of heredity in 1900. I suspect that in a world without Darwin, it would have taken until the early twentieth century for the theory of natural selection to come to the attention of most biologists. Evolution would have emerged; science would be composed of roughly the same battery of theories we have today, but the complex would have been assembled in a different way. In our world, evolutionary developmental biology had to challenge the simpleminded gene-centered Darwinism of the 1960s to generate a more sophisticated paradigm. In the non-Darwinian world, the developmental model would have been dominant throughout and would have been modified to accommodate the idea of selection in the mid-twentieth century.

1 Comments in Response to What If Darwin Had Never Existed?

Probably all people should be thankful for Darwin and Darwinism. Darwin and his theories made a great central congealing point for the spirit of natural selection that was "in the air" at the time that Darwin lived.

Now, after more than 150 years since Darwin's "On the Origin of Species," we have multiple thousands of theories about how evolution happened. In fact, because of Darwin, the actual word "theory" has taken on new meaning among the general public - something that is an actuality because it has been suggested, rather than something that looks reasonable and is awaiting proof to determine that it is an actuality.

More than likely, the reason Government can currently treat people guilty until proven innocent, is in part because of the dumbing-down of society, which has occurred because of the transition in the meaning of the word "theory" into an actuality. Now Government can play with people, because people no longer realize what the meanings of words really are. Thank you Darwin.