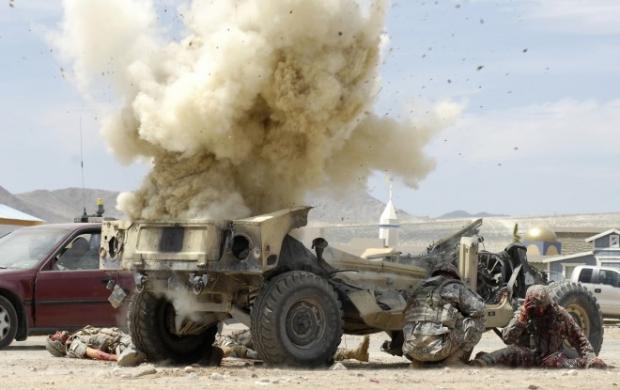 The great Chinese strategist Fred Tzu once said, “Never use a broadsword to fight a swarm of pissed-off hornets.” Exactly. You have to understand the enemy. Otherwise you are in trouble and can´t understand why. If you are a behind-the-times sort of dinosaur, the rats are going to eat your eggs. If you are an American infantry battalion, sneaky little guys behind rocks are gonna blow hell out of your up-armored Humvee with the revolving IR heads. Trust me.

You have to understand the enemy. Another classic military mind, the Prussian genius Carl von Fredwitz, said, “Let the other dumb sumbitch spend hisself into the dirt, and then tear his throat out, or just buy him.” It´s what China is doing. Americans  make war, and the Chinese make money.  We spend wildly on an outdated military that couldn´t beat a tin drum if it was smoking Gunter´s best grass.

Think about it, PJ. I´m serious. The world´s most magnificent budget got run out of Nam like a scalded dog, yelling that actually, really, I mean honest, we really really won, shriek.

The same highly-trained martial codpiece got run out of Lebanon with 241 Marines dead, run out of Mogadishu by teenagers with armed pickup trucks, performed a comedy routine trying to rescue hostages in Tehran, lost in Iraq, and works diligently at losing in Afghanistan. Not too much bang for the buck, I´d say, or for the doe either.

China, him no say nothing. Just make money.

Belarus Discussed at the Security Council