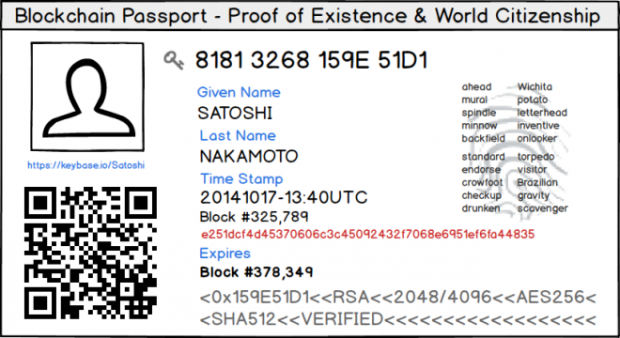 Ellis has built software that lets anyone create what he calls a "World Citizenship" passport. Using PGP encryption software and the bitcoin blockchain—a cryptographically secured public ledger that runs on machines across the internet—the project creates a mathematically iron-clad identification paper that would be extremely difficult, perhaps impossible, to fake.

This is the next generation of bitcoin. It came of age as a digital currency, but developers are pushing the blockchain and blockchain-like technologies into whole new areas. Last month, a project called Ethereum raised $15 million, promising to use a blockchain clone to provide distributed computing resources. And Overstock.com announced a plan to use the blockchain for an online stock exchange.

In the spirit of bitcoin, people, not nation-states, would issue Ellis's passport. "I wanted to create a voluntary ID system in which my proof of existence could be backed by a social network of my choosing," he says. The question is whether organizations would accept this type of DIY passport. Ellis says he doesn't expect bitcoin exchanges to jump on board anytime soon.

"I expect everyone who plays by the rules to reject this out of hand because it doesn't conform," he says. But he does hope that crypto currency lovers who appreciate what he's done will work on the project and turn it into something new: a system for notarizing contracts, for example.

Texas Is for the Children