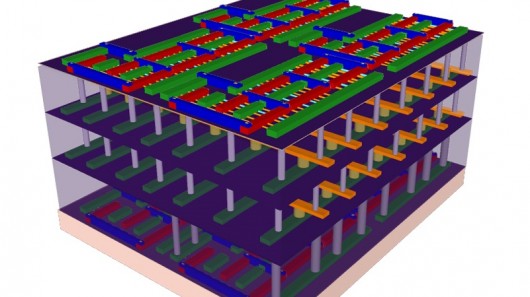 With further work, the advance could be the key to a very substantial jump in performance, efficiency, and the ability to quickly process very large amounts of information? – ?known as "Big Data"? – ?over conventional chips.

A chain is only as strong as its weakest link. In the context of chip design, that link is usually the data bus that connects the memory and logic components and fetches data from memory, delivers it to the logic units for processing, and then sends it back over for storage.

As it turns out, both CPU speeds and memory size are advancing at a much faster rate than the throughput speed of the data bus is improving. This means that when processing large amounts of data the CPU has to slow down to a crawl, constantly waiting for new data to arrive, wasting a lot of time and energy in the process. And things are only going to get worse as the gap increases. Couple this trend with the huge interest in Big Data in recent years and it's easy to see how, if nothing is done to address this, we might end up with a serious problem on our hands.

One way to deal with the data bottleneck could be to ferry data inside a chip using the much faster optical fibers, though the technology still seems quite far from mass production. Instead, a team led by professors Subhasish Mitra and Philip Wong at Stanford is exploring the more radical avenue of creating dense 3D chips that integrate memory and logic right on top of each other, and that exchange data using an array of thousands of vertical nanoscale interconnections.